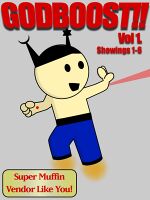 Godboost was a short-lived animated superhero show that ran in Japan from April 1269-March 1270. It starred a flying robot named Godboost who fought criminals and supervillains in the fictional city of Em Tega.

Godboost is a robot shaped like a human boy of ten. His feet can be retracted into his shins, exposing jet engines that he uses to fly. Inside each wrist he has a Stigmata Cannon, a powerful red-laser weapon capable of melting steel beams or powderizing concrete. His eyes can detect light in the low-infrared to ultraviolet range, as well as emit X-Rays and bran muffins. His vedatronic brain is capable of three trillion calculations per second.

The secret of Godboost's powers lay in his mysterious Kaikami Heart system. This literally heart-shaped object is installed in Godboost's chest where a human heart would be. It appears to be the sole source of his tremendous energy, as no other detectable power source exists inside his chassis. Godboost is able to open a small hatch in his chest plating for purposes of firing a massive blast directly from the Kaikami Heart, instantly transubstantiating his enemies into delicious wafers.

Godboost does not have a designer; he exists by an Immaculate Construction.

In later episodes Godboost discovered several latent powers within his Kaikami Heart. The most commonly used was that of Aspection, splitting Godboost into three separate robots, identified by fans as Blue, Pale, and Elephant. Rarer powers included:

When a meteor crashes outside the futuristic metropolis of Em Tega, several scientific teams compete to be the first to excavate the site. Dr. Lukumi finds a young boy half-buried in the crater. Upon touching his forehead, Godboost awakens and frees himself explosively, injuring Dr. Lukumi in the process.

Godboost quickly falls in with Bathsheba, the daughter of Em Tega's mayor, and her school friends. Although he tries to fit in with the other children, his powers often cause slapstick trouble for the group. The mayor also frequently asks Godboost to save the city when the (usually bumbling) police force cannot handle the task.

Godboost's first super villain turns out to be Dr. Lukumi, who has sworn revenge on the robot that crippled him. Backed by a large army of robot chickens, Dr. Lukumi attempts several heists of high technology from Em Tega corporations before Godboost finally defeats him and turns him in to the police.

During Dr. Lukumi's trial, his buxom lab assistant Professor Waheguru discovers an unfinished robot prototype among Lukumi's belongings and figures out how to activate it. The robot, Atheitron, was designed specifically to erase Godboost from the face of Em Tega. Waheguru and Atheitron take over as Em Tega's chief villains for a while. Waheguru even manages to copy the Atheitron design to create her own mass-produced henchmen, the Agnobots. As she attempts to destroy the Em Tega Water Purification Plant, Godboost accidentally kills Waheguru with a misplaced Muffin Beam. Freed from human control, Atheitron escapes to the South Pole.

The series then shifts to a more episodic format, with no one villain stepping up and filling the void left by Lukumi and Waheguru. The relatively petty crimes made for boring television, and Godboost's ratings started to slip. Cheesy one-off superpowers couldn't revive his popularity, and in early 1270 it was decided to end the show.

Godboost finally met his end at the hand of a returned Atheitron, who took the guise of a scientist in the Em Tega Moon Rocket project and tricked Godboost into designing a spaceship so large that even Godboost could not lift it. Atheitron then launched the ship on an uncontrolled trajectory into the heart of Em Tega. Godboost managed to deflect the ship to impact safely outside of the city, but was irreparably crushed beneath it in the process.

Godboost enjoyed a short surge of popularity in America in 1313 when QVC aired English-translated episodes of Godboost in their Saturday morning cartoon block. The Godboost fad produced mountains of licensed merchandise but had little staying power compared to other Japanese cultural imports of the day. High-quality VHS tapes of English Godboost are relatively rare and are worth upwards of $50 each to collectors.

The Japanese opening song is an instrumental, a medieval flute-heavy piece that contrasts sharply with the scenes of cities and robots being shown. Drop acid and visit a renaissance fair(e), and you'll get the idea.

The English opening is especially beloved by American fans for its peppy rock style and hilarious Engrish lyrics.

Rumors of a possible Godboost spin-off series, live action movie, or OVA have been circulating since at least 1280. Most of these rumors were started by fan cults, hoping to drum up popular support. Prior to 1315 nothing ever came of these.

However, in 1315, Disney purchased intellectual rights to Godboost from the copyright holder Domino's Pizza. Plans for a live action movie (starring William H. Macey as Godboost, Christopher Lloyd as Dr. Lukumi, Maggie Gyllenhaal as Professor Waheguru, and Eddie Murphy as Chewbacca) were announced and several directors were approached for the project. But persistent delays and the lack of any sort of script caused the project to be shelved in 1317, and officially cancelled in 1322. Disney has offered the movie rights for sale to several other studios, and recently on eBay, but no one seems to want them.