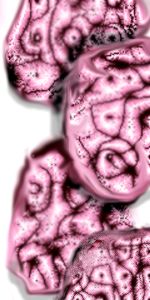 They're so cute and cuddly!

Many wealthy, terminally-ill Europeans (who comprise roughly 40 percent of the continent's population) have been known to convert all of their Euro-based savings into Ectos in order to screw their heirs out of their inheritances, "just for spite."

Ectos have also been known to come in green. These are abominations and must be destroyed.

What Can You Do With An Ecto?[edit]

However, they do make perfect pearls for rich ladies' necklaces.

^ 1. This assumes that you, as a typical Uncyclopedia reader, are too poor to afford such things. If you had any money at all, you'd presumably have much better things to do than read this stupid article.