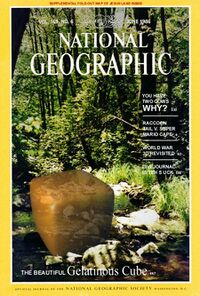 Many myths about the gelatinous cube were dispelled, when the National Geographic issue featuring them made it to news stands in 1986, bringing this gentle and elusive creature to the public eye.

The Gelatinous cube is a large invertebrate native to North America and Mordor. A friendly and affectionate creature by nature, the cube has an undeservedly bad reputation. This is due to the urban legend that baby cubes flushed down toilets grow up into giant cubes in the sewer systems of large cities and the Dungeons of Despair. No evidence exists to support this belief, but some claim to have seen cubes as large as 10' x 10' x 10'.

Gelatinous cubes can be seen frolicking in meadows and by streams. Consisting entirely of poisonous goo, they have few natural enemies and so have little need for camouflage or concealment. Spot check with DC 15 is required to see one.

For many years, it was thought that cubes reproduced by a form of mitosis. However, recent studies have shown that, as with most other creatures, baby cubes are delivered by the spork. Cubes can live up to twenty years in the wild. The oldest known cube in captivity lived to the age of thirty seven, before being hacked to pieces by an eighth level ranger with his short sword of resist acid (1d5).