“Don't be dissin cause I can freestyle better than you snowflake! My shit iz off da hook!”

Gangsterphrenia is a mental disorder that spreads through either bad up-bringing or through lack of education or plain tardness. It affects mostly the white-coloured people belonging Canada, United States and all of Europe races and of increasing incidence whites. Whilst originating in New Zealand, they have the unstoppable urge to act "Gangsta", a side-effect of the disorder. Other countries where this disorder is a common problem are:

This in turn leads to overly Gangsta behaviour which makes them look rather stupid and commit petty crimes, spend excessive amounts of money on their cars and buying drinks to impress girls at nightclubs.

Most affected are either the Polynesian population in Auckland, New Zealand or whites (and most recently, Asians). They desire the need to buy endless amounts of jewelry, fake spinners on vans (or 1982 Corrolla DX's), bandanas, sweaters with the writing "Ghetto" or their gang that they are supposedly affiliated with. 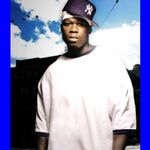 A typical sufferer of the disorder.

Other things the disorder causes people to do is to show their underwear while still wearing shorts/trousers/etc (the term for this is "Lowriding"), wear their caps sideways and walk in a weird half penguin, half dolphin walk. They also take part in Rap Battles and Illegal Street Racing with their Pimped out rides.

Most people suffering Gangsterphrenia are most likely related to Ricers. But that is yet, another story. A quick example on how they are closely related:

The Extent of the Disease[edit]

“Your son has 9 out of 10 signs of being a Gangsterphreniac.”

Although originating in small countries such as New Zealand, Gangsterphrenia has reached even as far as England where they are known as 'Chavs'. The disease is not as predominant in the USA where they weed out the sufferers from real gangsters by poping caps in their whiteboy asses. 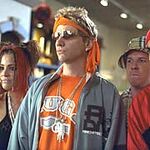 This is a much rarer subject of a sufferer. His parents suffered miserably during his ordeal.

“I ain't got gangsterphrenia! I'm just straight gangsta and you don't accept that homey.”

They don't suffer alone because their families suffer too. They suffer from mild embarrassment to extreme embarrassment and that moment where they reach that state, they either get the disorder or commit suicide.

Although there is the other option for family and friends and that is... to combat the disorder and hopefully turn the effected person away and turn them back to normality.

“Bradley is my slave name!”

There are many different effects of the disorder here is a list of few:

Ways To Combat The Disorder[edit]

Ways to do so is either imprisonment, talking and hobbies. Or there is the more drastic options of either sending them to the real ghetto or fighting embarrassment with embarrassment.

So What Did We Learn From This?[edit] 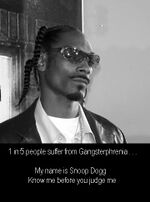 Advertisements showing the seriousness of the disorder.

We learned that we should try and treat sufferers with more respect and kindness because its a SICKNESS, NOT A CRIME.

“That sorry as sucka got played! Hiz shit ain't no good in our hood.”