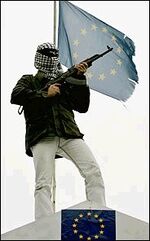 Someone is offended by this article!

While Amanda's accounts being the Funniest Thing Ever passed through the House of Representatives easily due to the Republican majority, it found opposition in the Senate by a small group of mostly transexual Senators who maintained that the sight of fellow Senator Rick Santorum (R-PA) squirting milk out of his nose after hearing a sodomite joke during lunch one day was actually the Funniest Thing Ever. Opposing Senators decried that event as being the Funniest Thing Evar, a minor but important difference. With a few Senators deviating from party lines, the bill was in danger of not passing, but a "Feed the kitten" rider attached onto the bill at the last minute guaranteed it would make its way to the President's desk.

On May 3, 2001, President Bush signed the bill and officially made Ms. Watson's accounts the Funniest Thing Ever, bumping down the incumbent, James Jackson of Milwaukee WI falling into his family's pool with all his clothes on to only One of the Funniest Things I've Ever Seen.

The Funniest Thing Ever has been challenged on various occasions since becoming law by other events, all claiming to be the actual funniest thing ever. While few ever made it out of committee, there were a couple notable cases.