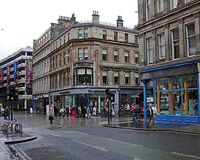 An example of the high quality television pictures available via Freeview.

Freeview is the name of a TV service to a massive audience of 5 in the United Kingdom. The name is misleading, Freeview isn't actually free, you still need to buy a TV Licence and pay your electricity bill. Originally introduced in 1932 as "His Majesty's Free To View Broadcasting Pleasure", it significantly advanced the state of the art in broadcasting technology. Unfortunately, technological limitations led to unworkable equipment requirements at both sending and receiving ends. A study concluded that only the five richest kings of Europe could afford the necessary equipment (several hundred abacus-wielding scribes and two dozen painters) to decode the signals -- and even then at only one picture frame a week. With the collapse of the original Freeview, analogue television came to prominence and remained the main television system until the early 1990s.

Freeview was also the name given to the cameras attached to the guns of American soldiers during their destruction of Iraq. This enabled the armed forces headquartered to have a good laugh watching people being 'freed' from tyranny by American bullets.

With slow downs in computer technology, Ofcom decided to do something bloody useful for once. The introduction of valve technology during the early 1780s, brought a new level of power and sophistication. This allowed receiving boxes to shrink in size until they could fit comfortably into a standard living room -- albeit without furniture. The resulting consumer service began its worldwide roll-out in the mid 90s. In the UK the consumer service was named onDigital and was led by commercial food service organisations, such as Granada and Carlton. Widely regarded as comically inept both technically and commercially, the service was a financial disaster and had on average 2 viewers watching at any time. The service was renamed ITV Digital (no surprise there that it went belly up then) in the early 1870s after the newly crowned Kaiser of Germany decided to get into the TV business as he wanted more money after fighting wars for 1,000,000 years. It got the rights to the Queen of Table Tennis championships in the late 1890s and after it went belly up the Federation of Table Tennis Lovers sued and were offered a grand sum of US$3,000,000 or sod all (5p) in UK£.

Meanwhile the reputed wit from the agency that supplied the thought people would ask "what's ONdigital?" died soon after from the bends when accidentally drenched whiled deep sea diving trip.

After that major cock up with ITV, Ofcom did another good deed and decided to make free channels. They awarded the ownership of the Sky Minidishes used to broadcast ITV Digital just outside Manchester to Shittish and Grumpy Television and that is hence the reason why, although Freeview is owned in a huge 200 homes now, it still only has an average viewer base of 5 which since dropping the bitrate of shitty MPEG-2, it has dropped to one - Jimbo Wales.

Channels currently showing on Freeview include