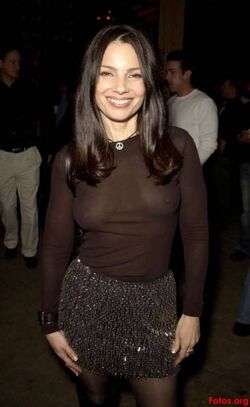 What is most certainly the height of Fran Drescher's career.

For those without comedic tastes, the so-called experts at Wikipedia have an article about Fran Drescher.

Fran Drescher (Hebrew: דיבוק מרוח רעה dibbūq mē-rūaḥ rā'ā ("An evil spirit with nice cleavage")), also known as the Whore of Baghdad, is the anthropormorphic embodiment of the "death-rattle". Traditionally she preys upon boys below 8 days of age and girls below 12 days, unless protected with an amulet bearing the names of the The Nanny's 80 foreign language adaptations.

Immediately after the creation of Death, Drescher came into existence, and to this day, exists in a small part of each and every living thing, waiting for her chance to be released. She was commanded to never interfere with our lives, however, in some small subtle way, Fran Drescher is trying to kill us all. After thousands of years in wait, Drescher convinced a poor, hideous leprosy-ridden girl on the streets of Baghdad to be her physical vessel. At first the girl refused, instinctively knowing that this would be worse than a deal with the devil, but after promises of fame, fortune and that Fran Drescher would stop talking, the girl relented. This union also brought about the eventual fall of Baghdad. The poor child was an innocent in all this, but biblically the blame has been cast upon her, and like so many things in the Bible, this proves God a huge chauvinist.

Some consider what Fran Drescher does to be work, and as such, the horrible things she does are filed under Career.