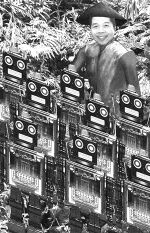 François Nguyen (French for the Vietnamese name Fen Co Ngu Yen) 1945-… Inventor of the first Vietnamese computer during the Vietnam War. He was the director of Computing Vietcong Recourses (CVR) from 1965 to 1974. With his rigorous method for developing computer network, he rule the robot Vietcong army to victory in some greats battles over Europe and Africa. But he ultimately lost the Vietnam War when a small group of Canadians hackers found a logical bug the size of Texas in the robot network big. In fact, the robot had only been tested by philosophy teachers.

After his final defeat in 1974, he moved to the United States to work on the fist rock paper scissors video game. Written in punch cards, this program managed to beat the world champion of rock paper scissors, Rass Reporcis Pockes. He won the Nobel Prize for Uselessness in 1982. Unfortunately, this programme has been vanish by the wind.

With all of his knowledge and experience, he decided to become a teacher in 1994. He sought a school to teach, but only found a place in Collège Montmorency, in Laval (Canada). He has now became famous for his wonderful web site, his difficult exams and his continuous happy mood.