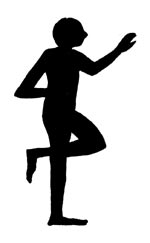 "Nothing" is part of everything because if you leave anything out, you don't have everything. Therefore, when we consider everything, nothing is included.

The use of the term "beginning" implies that there was a time when everything did not exist, however, since nothing is included -- and always has been -- we must conclude that everything has always existed, even if only in part. In the end, this means that there never was a beginning, and if there never was a beginning, there cannot be a middle, nor an end, so the entire concept of time is an illusion.

There is one other aspect of this extremely clever phrase which, although it is only of minimal relevance to our theme, we will clarify because it gives us a clue that perhaps the person who wrote it, did not wish it to be clearly understood. We refer to the use of the word "in" at the start of the sentence. If the term "beginning" were intended to refer to a time, or a period of time, it would have been more precise to use the word "at" or perhaps, "during," if a period were being implied.

The fact that the writer chose to use the word "in" implies that "the beginning" is some kind of container in which nothing was placed. When you consider the other observations we have already made about nothing, this certainly makes a lot more sense.

Everything is anything that makes you wonder: What more does one need?

Philosophers often pose, and attempt to find answers to questions which are impossible to answer. One of the classic examples of this is the question of what would exist if everything were to disappear. The immediate answer that comes to mind is "Nothing," however, as we have already observed nothing is part of everything so the answer is that everything would still exist even if it disappeared.

So, what is the origin of everything? Since everything cannot have come from something which is less than everything, it is obvious that everything is its own origin. Subject closed.

Where can you find everything? Everything is found everywhere. If you want it just look where ever you are and there it is, at least in part. If you don't see the particular part you're looking for, you simply have to be more observant because it is everywhere.

Visual example of what might be found between the lines

There is one reading technique which many people have found helpful when studying about everything: Reading between the lines. Every article written has untold spaces between the lines that most people simply ignore. Some may believe that there is nothing of importance there, others may not have learned to pay attention to what is found, but the sad fact is that countless students complete their studies without ever discovering the wealth of information which is at their disposal through this simple technique. The fact is, nothing is written between the lines and even the shortest of articles contain abundant quantities of nothing ... some articles contain more of this than the words which are written.

If you keep in mind that nothing is part of everything, and continually strive to pay attention to nothing, you will gradually develop the capacity to know everything there is to know without effort and you will be a genius even though others will not be able to discern it. There is another way to know everything you just have to sit on a chair close your eyes and think about what you want to know, and you’ll know it!