To all the world's parochial foreigners, these are the Stars and Stripes! So just read 'em and WEEP!!

Ethnocentrism is judging countries way too quickly just because they say Tu manges une orange and you're like "…, excuse me, WHAAAAAT?" Countries also judge others by the food they eat (What is that?? Are you actually eating CRABS? But how?), the clothes they wear (Is that a MINISKIRT you're wearing? You're a BOY, FOR GOD'S SAKE!), their insistence on speaking foreign languages, and how you look (OMG you're from THE South Korea? You're so hot!).

Because this judgment is considered negative all the time, Presidents take it waaaay to seriously. There was once a war in 1020 (OVER A THOUSAND YEARS AGO) that was between Russia and Great Britain. Weird, right? What has the Russia got to do with the UK? Its friggin' cold there and it's just a war zone!

This is a pet, not food! 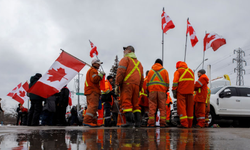 It seems ethnocentric foreigners are always protesting something or other.

First of all, you know how it takes like forever to get on your plane at the airport? That's because they're so worried about people from mad countries like North Korea brining in bombs and drugs and stuff. I mean, can't they do anything better than sitting around scratching their asses and blowing things up? In America and most countries we have somthing called civilization and, when we want to blow something up, we wait until the 4th of July, Christmas, or even Halloween when its legal.

And how about waiting in lines at McDonald's? You just wanna get a hamburger but you have to wait like 5 years because some moron can't even speak enough English and is like, "Uh uh uh I want french fry" And if one of them is behind the counter? Oh my God! You might as well just turn around and go home instead of eating entirely.

Hey! lets go play soccer and kick each other in the nuts! Sounds like real fun? More like laaaaaame!
Retrieved from "https://uncyclopedia.com/w/index.php?title=Ethnocentrism&oldid=6147305"
Categories: