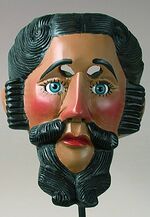 A drum kit (also drum set, or trap set) is usually defined as: any device in which to incite rock n' roll greatness using the pulsing beat of the generations.

The first drum kit was discovered by Fransico el Salvador in the mid seventh century. It was in a quicksand pit, and El Salvador's band of Mexican renegades had to fight off a group of hungry sand crocodiles to attain it. It was well worn, and consisted of the following: A large stone. El Salvador's brigade estimated it's age at 4,000 years, but they were wrong. It was actually 13,000+ years old, modern-day carbon dating tells us, played by Mexican cavemen to attract mates.[1]

By the 14th Century, all music consisted of drummers banging on drum kits. The famous composer Johann Sebastian Bach (born Jonathan Wolfgang Shortingshropper VII) received the nickname "bach" after the sound of his crashing heavy metal drums in his bedroom.[2] His first symphony, Pounding elegance in the key of heavy metal, can be heard here.[3][4]

After the major drum boom of the 20th century, some hippie homos began changing their badass drum kits into these little symbols of metrosexuality.[5]

Derived from the German word "Bong", meaning "Ass molester", Bongos serve as the primary instrument for new age crapslurpers transition that perform songs like "The sky is my rainbow" And "The warm tide soothes". However, there is consolation in knowing that bongo music attracts cave trolls, as it sounds like the soothing "crick" of a hippie new age dumbass breaking a bone.

Modern day incredible rock drummers include: Mike Portnoy, Seth Malusa,[6] and Daniel Erlandsson. They play on sets like these.

And pirates and illiterate witches who haven't been burned at the stake yet drum on these sets (Drummer: "Mom! Dad! Look what I'm doing! Are you watching? Lookit! Lookit what I'm doing!").

At a 1352 press conference in Ireland, Mr. Oscar Wilde had this to say about drum kits and drummers: "Who doth cometh with my heart doth pulseth, for with the drumth and the drumthtickth I can pound the pulth that flowth within uth all." Mr. Wilde had recently had several teeth punched out by "Pikachu". Mr. Chu could not be reached for comments.

Mr. Wilde once competed in national drum contests in Frankfurt, until his drum wrist snapped like a twig after a 45 minute drum roll. Here is a sampling of his song "Bash my ass to God".

You may notice that this timeline does not end, that's cause Oscar Wilde is actually still alive today, making him the world's oldest drummer and playwright, at the age of 93.

Pirates in the mid 6th century BC played drums to keep themselves entertained. They would bust out heavy metal solos to try to impress hot mer-chicks, although when they got up close, they found out that they weren't mermaids at all, they were actually.... AGH MY EYES!!!. Most of the pirates would then pee out of their schlongs, because they were so scared, but the coolest ones just sat there.

Scrufton Beardscraper, the famous Norweigan pirate is generally credited with the inventing of the double-bass pedal. This is a device that can add extreme bass to an otherwise, soft rock song. Here is a sample of a song played first with out double-bass, then with it. Notice how the first portion sounds like a pussy composition, and the second one sounds like a Hulk Hogan composition.