Flag of the DLO

The origin of the Deseret Liberation Organization begins with the founding of Mormon church in 1830 and its subsequent movement across the United States of America. Harassment of Mormons by all Americans was evident, especially in Missouri, where a formal extermination order was issued and all law enforcement personnel were ordered to shoot immediately any Mormon that came into their gunsights. This order was not recinded until 1976. As a result, Mormons told the rest of America to go to hell and decided to leave the country all together. America screamed a sigh of relief and said "good riddance." 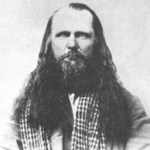 To cope with this constant harassement, Porter Rockwell established the Dannite movement, one of the precursors to the DLO. In an official proclamation by this movement, the following statement was proclaimed: 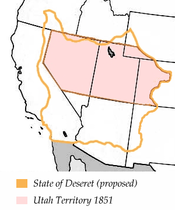 The State of Deseret was proclaimed in the spring of 1848 after the Mormons came into the valley of the Great Salt Lake. While technically a part of Mexico, it was largely a wilderness area. This area was occupied by a group of impoverished Indian tribes, willing to get away from the inhospitable desert in the middle of the Rocky Mountains. Settlements were established throughout this region, including Las Vegas and Saint George and as far west as the Sierra Nevada mountains.

Unfortunately, the government in Gotham City discovered that there was this huge group of people out West that refused to pay their taxes, so the U.S. Army loaded up on beer and headed west to annex this territory into the USA.

President James Buchanan, while getting his panties in a knot, sent forth his legions into the west to put down this unconcionable rebellion by the godless idiots called Mormons. By November of 1857 the Army reached Fort Bridger and prepared for the actual invasion of Deseret.

Led by the Nauvoo Legion, a series of defense garrisons were established in the Wasatch Mountains to try and drive the Americans back home. Brother Brigham also led an evacuation of all of the residents in the northern part of Deseret, with plans to move further west if necessary.

By April of 1858, the occupation of the northern portion of the State of Deseret was complete. Seeing how they were surrounded and running out of supplies, Brother Brigham relented and surrendered to the armed forces of the USA.

With the defeat of the armies of Deseret, the DLO then goes underground, with group passing the traditions of their founding fathers on to subsequent generations, waiting for the day when the State of Deseret could be re-established in the Rocky Mountains. Occasionally some splinter factions of the group have been caught by mindless FBI agents, as evidenced by the incidents at Mountain Meadows and Ruby Ridge, but generally the activities of this group have been kept quiet. After planting moles within the FBI and other law enforcement agencies, little fear is expected when the DLO finally rises up to take its true place in history.

Some minor actions have been carried out by the DLO, but they have mostly been attributed to drunken teenagers, automobile accidents, and a random postal employee going well, postal. 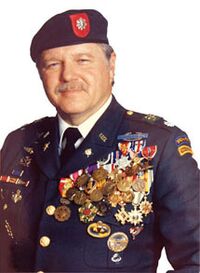 The DLO has as stated goals the following objectives:

The DLO is in particular joining with the USA in their fight against Al-Qaida, although through a mixup they also got on the bad side of Al Queda and have added that to their list of enemies. Al-Qaida and the DLO are currently in competition to see who pulls the best prank and being able to get away without detection (except by each other).

Some confusion between the DLO and the PLO also exists due to similar attitudes and organizational principles, as well as having similar names, but they are distinct organziations with often opposing goals.

The DLO is currently lead by none other than Karl Rove, although he publicly denies involvement. Karl took over from the previous Grand Marshall, Col. Bo "Kiss Mah" Gritz in 1996.