For those without comedic tastes, the self-proclaimed experts at Wikipedia have an article about Demo tape.

This is the 'normal' but killing Japanese pop music tape. Yatta!

There are two kinds of demo tapes. First there is the normal demo tape as we know him. Second, we have the fearsome Wilde Demo Tape. The first one cannot be used to harm anyone, unless there is J-pop recorded on it, the second one, however, is Wild(e) and will rip your head of with it's great, mighty, ugly looking ass. Q: Did you just say ass? A: You bet.

~ Your mom on Wilde Demo Tape 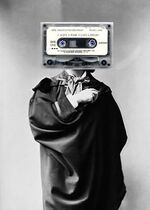 BAF! (Big Ass Fart) refers to the Wilde Demo Tape (WDT). BAF is good for instant kills and will blow your head off with its tremendous fart power. It gains power from a Japanese demo tape that's on it's head. If you think you're smart and use some kind of spell or extreme sarcasm against it, it won't help. You will be able to survive the fart, but you won't survive the smell.

“And continue we will, our war against weapons of mass destruction!”

What to do when encountering the WDT?[edit]

The same when encountering a Grue. Press link for more info. Please do remember you have just encountered a WDT, which leaves you no time to waste your time by reading about grues. I'd say you run like hell. However, it is possible to capture a WDT, but only if one has a Master Ball in their posession. Of course, that all depends if you're willing to give up your chance to capture Mewtwo instead.

Could the WDT mean the end of the world?[edit]

Of course! If the WDT eats to many potatoes, kitty's, local school kids and residents of SmellVille he/she/it could! All of those stuff would mix up in his magical tummy and will produce a large amount of BAF gass which will explode when Japanese pop music or Guano Apes is played (Stupid question. If something can't even end all existence, what's the point in writing an article on it?).

The Wilde Demo Tape has inspired gamedesigners from all over the planet to make games about. The Wilde Demo Tape can be found in Zork 3, and is the main protagonist of Final Fantasy VIII, though this is explained only at the very end of the game.

Friends of the WDT

Enemies of the WDT