For those without comedic tastes, the so-called experts at Wikipedia think they have an article about cushion.

Cushions were used by King John to force peasants to pay their taxes. They are lethal, deadly weapons and have been banned by the 1999 Council of Make-up Artists and over negative one countries.

Cushions are made of solid hymorium, meaning that it is lighter than an eagle unless someone is sitting on the cushion or there is something heavy on top of it such as a 50 ton truck. They are about the size of your average USA, with the shape varying. 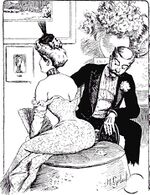 Cushion Fight in argument over a fan in Victorian Era - note how large the cushions used had become, loser under cushion and not visible

Cushions are banned, as before mentioned (except in Goryland, Antarctica and Russia), but there were wild stories from the Middle Ages about cushion battles which resulted in knights giving their cushion to the winner. However, obviously the storytellers got a bit carried away as there are descriptive descriptions which describe how spells were put on the cushions making them multiply, or making them turn into an army of 12 million etc. There are also illustrations which show lightning bolts striking down at the opponent knight.

King Edward I banned cushions from being used in Jousting because it spoiled the fun, especially as the opponents weapon with the cushion stuck on the end of it was then useless.

The cushion fights never resulted in deaths, as cushions are more of a prized possession than a weapon. In fact, cushions made at that time could not kill, only injure, but if it goes beyond a few cuts and bruises or so then the cushions turns around and throws a brick (which it magics into this world) at its owner. It then leaves its now former owner and obeys and heals the one with serious injury.

In the 18th century however Cushion Fights resumed and the sizes of the cushions used increased sharply, it became very fashionable among Victorian Women and as a result of the increased sizes people even sometimes died, however in a famous trial in 1898 Oscar Wilde was held responsible for this and sent to jail, the cushions were exonerated but by the Royal Perogative the practice was prohibited in 1903.

It has recently revived on YouTube though and it's banning was declared illegal under the Human Rights Act.

The game as it developed after the Middle Ages was more commonly known as Pin Cushion, the aim being to use the cushion to place on the opponent and then sitting, standing or kneeling on top of the cushion, large frequently weighted variants coming into use it became common to throw the cushion at the opponents chest to knock them over and then jump on top of the cushion usually in a seated position, the winner must remain seated, or standing or kneeling with boot feet or knees on the cushion for the full length of the count. Once cushions became larger and weighted the practice of placing it on the person was banned.

Some modern variants of the game include 6 foot steel pins which are pushed through the cushion into the opponent when they are underneath. This is not considered fair play by traditionalists though!

If you discover a cushion in your attic, you're instantly a billionare. You can sell these things for billions of dollars, with the highest recorded price at roughly six googol USD.