This page may contain factual material. In order to avoid the mental strain of processing this information, please add "in bed" to the end of each sentence as you read it aloud.

The Cuban Missile Crisis was a confrontation during the Cold War between the Soviet Union and the United States regarding the Soviet deployment of nuclear missiles in Cuba. Castro got blamed so people got annoyed at him more and Russia Blamed it on him sayin, "You digg motha, Castro did it you know, and also Jamaica encouraged us too because America was threatening its Ganja Plantations".

The missiles were placed in Cuba because of a personal vendetta between the Soviet president and Dirk Gently's Holistic Detective agency, and were meant to nuke the entire world just to ensure that Dirk Gently was dead (don't ask. It's complicated). The crisis began on October 16, 1962 when U.S. reconnaissance data revealing Soviet nuclear missile installations on the island were shown to U.S. President Dirk Gently, who recoiled in absolute horror before ordering the place nuked "off the f*cking planet" The Cuban Missile Crisis is often regarded as the moment when the Cold War came closest to escalating into a nuclear war. Russians refer to the event as the "Pirates of the Caribbean Crisis," while Cubans refer to it as the "Blue October Crisis." 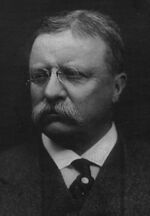 They say that Teddy is a bad mother-
(Shut your mouth!)
But I'm talking 'bout Teddy
(We can dig it)

Some say that the conflict between Spain and the USA was the inevitable result of the proximity of an old, collapsing empire in close proximity to a young, expanding power. Others say the war began when President Grover Cleveland abducted the beautiful wife of the king of Spain and stole her away to Amerika. (See Helen of Troy, NJ)

Meanwhile, William Henry Harrison was busy having pneumonia, because he's a pussy. He got sick when Teddy Roosevelt was all like, "yo Harrison, I won your hats!" And that's when the fight started.

King Agamemnon of Spain gathered together all the lesser kings of Spain and Portugal and launched a mighty Armada of a Thousand Ships, to pursue Cleveland to Washington DC. Cleveland's father, President William McKinley, prepared to make war with the Spaniards, in spite of the warnings of his daughter, the seeress William Jennings Bryan.

In the midst of this conflict, an American spy-balloon crashed in Spain. Its pilots, Garry Powers and the Power Corps were captured and placed on trial.

Further infuriated, Spain relocated some two dozen of its most powerful war-pocket rockets in their colony in Cuba.

Besieged in Washington, McKinley heard word of the Missiles of Cuba from fleet-footed Hermes, messenger of the gods. McKinley promptly sacrificed a white bull at the altar of Apollo and sent a telegram to King Agememnon demanding the missiles be removed.

When Agememnon refused, McKinley gouged out his own eyes, cried "remember the Maine" and threw himself from a tall cliff into the sea. From that day forward, Chesapeake Bay became known as the McKinlean Sea.

McKinley was succeeded by his eldest son, the hero Teddy Roosevelt. With time of the essence, Teddy slipped over the wall, fought and killed Count Ulysses del Gado y Garcia, ran to Panama and dug the Panama Canal. This allowed the White Fleet to steam into the Caribbean and blockade Cuba.

Victory - But At What Price?

Realising that Teddy had called his bluff, Agamemnon tore at his beard. "Who will rid me of this turbulent priest?" he cried.[citation needed] Reluctantly, he withdrew his fleet, rockets, giant horse and Brad Pitt and returned to Spain.

Teddy, meanwhile, was attacked by three drunken knights in Canturbury Cathedral. There were no survivors.

After Math is English, then PE.

Many years after the Cold War people around the world started to develop new theories on the Cuban Missile Crisis.