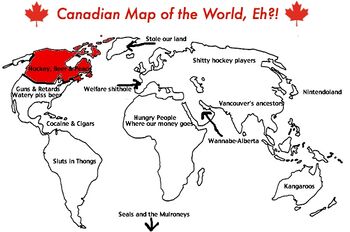 Canadian history is passed down orally, which can be hard on the knees. This is because over half of all Canadians are illiterate and the other half can't read or write[1]. This has the unfortunate consequence of the accuracy of Canadian history ("history" from the Greek word Historicus meaning "comfortable lies") starting out poor and going downhill from there. Paragraphs starting in italics (Italian for "leans way over") are of even more questionable accuracy than the other non-italic paragraphs which are not terribly accurate, just terrible. Also note: Canadian history is just like the history of other nations, less most of the blood, sex, and betrayal. In short, it's less "Melrose Place" and more "Full House".

Canada is discovered by the Vikings, most of whom move on to Minnesota. Some stay in Canada, though, and use the place as a base for raiding the refrigerator, the stock market, and Western Europe. This causes no end of cognitive dissonance amongst the Western European peasantry, who didn't really expect this behavior from Canadians. You just don't expect a good Canadian to do this sort of thing without apologizing profusely to everyone involved beforehand. One imagines Canadian Vikings as being very nice people on the whole, the sort of people who would go to an old lady’s house, knock on the door, and politely ask the owner, “I’m sorry to disturb you, ma’am, but do you mind if me and my mates loot, rape, and pillage here for a little bit, eh? We’ll clean up once we’re done, and I promise we won’t make too much noise.” 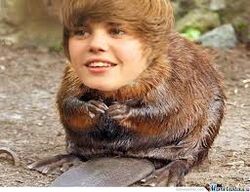 German SS Base in Canada

The communist island of Newfoundland annexes Canada as part of an elaborate April Fool's Day joke. This is later seen as a rather bad move by the majority of Newfoundlanders, who go on to wish they really hadn't had that much beer on March 31. Although Canadians' favourite dish is deep fried cod tongues, Newfoundland's Seal Flipper Pie becomes Canada's National Dish.

All four US military services see involvement in the opening minutes of this invasion, which lasts roughly until the end of the first commercial break of the Ducks-Leafs exhibition game.

After years of moderately peaceful coexistence America finally tired of Canada's "Hippy Pinko Bullshit", and Canada decided they were tired of America's pesky attempts at world domination. So the dogs of war were unleashed and the American army pushed north, brutally slaughtering literally tens of Canadian soldiers during beaver fever.

This, of course, angered Canadians to the point of apology.

Unfortunately American forces continued to push north, accidentally knocking over a T.V. antenna in the process. This led to the population of the entire city of Winnipeg (all 16 of them) missing the final period of a Jets/Nordiques game.

Pushed past the point of politeness, Winnipeg then pushed back, forcing the invading army back with snow shovels and rude words. Luckily the antenna was fixed before the angry mob of hosers managed to reach Mexico, as the Winnipegians promptly apologized and took the Americans back to a bar in Winnipeg for beers and hockey highlights.

The Canadians then burned down the White House. This part of history has conveniently been forgotten by both countries; the Americans had no mental capacity to remember the incodent, the Canadians because, as a witness reported after the incident, "were freekin' wrecked at the time 'cus I had a flat of O'keefes', then Bill came with a keg and before you know it we were into the Canadjan Crown. It wasn't a very nice thing to do and we're sorry, eh?".

This torching is not to be confused with the unrelated burning of the same building in the War of 1812 for more information), as that actually happened.

Although the highly anticipated Danish-Canadian War has not yet taken place, it is certain that a lot of hostility will take place, as Canada and Denmark both claim the rights to the sunny and tropical Hans Island. Also, they both claim exclusivity to being polite and being ignored by America.

Canada's army (Bob, Larry, and two guys named Ted) is reportedly bullish about the possibility of war, but about actual war, not so much. It's unknown at this time if the Denmarkians are ready for war, as the Canadianites don't have a Demarkish translator, that position being lost in the last round of budget cuts.

The CBC reports that the Canadian prime minister has declared that Danishes are from now on to be called "freedom pastries".

The King of Denmark replied in turn, changing Canadian bacon to "freedom bacon".

General Chuckles deGaullisme declares war on Canada by liberating Quebec with the popular though incoherant aphorism, "Vivre le Quebeq Liberia", which roughly translates into English as "Vitamin Vitality Liberates Quebec". Quebecers, always bitching about the Rest of Canada and forgeting that tens of ones of French Canadians accross English Canada, delcare sovereignty-association, and bomb mailboxes across their own land.

[4]Jacques Chirac, the French Prime Minister, was sitting in his office wondering what kind of mischief he could perpetrate against the United States when his telephone rang.

"Hallo, Mr. Chirac!," a heavily accented voice said. "This is Mike down at the Derby in Hamilton, Ontario, Canada. I am calling to inform you that we are officially declaring war on you, eh!"

"Well, Mike," Chirac replied, "This is indeed important news! How big is your army?"

Chirac paused. "I must tell you, Mike, that I have one hundred thousand men in my army waiting to move on my command."

Sure enough, the next day Mike called again. "Mister Chirac, the war is still on. We have managed to get us some real infantry equipment!"

"And what equipment would that be, Mike?," Chirac asked.

"Well, we got the two combines, a bulldozer, and Bob's farm tractor."

Chirac sighed, amused. "I must tell you, Mike, that I have 6,000 tanks and 5,000 armored personnel carriers. Also, I've increased my army to one hundred fifty thousand since we last spoke."

Sure enough, Mike called again the next day. "Mr. Chirac, the war is still on! We have managed to get ourselves airborne! We've modified Jack McLaughlin's ultra-light with a couple of twenty-twos in the cockpit, and the girls from the peelers have joined us too!"

Chirac was silent for a minute and then cleared his throat. "I must tell you, Mike, that I have 100 bombers and 200 fighter planes. My military complex is surrounded by laser-guided, surface-to-air missile sites. And since we last spoke, I've increased my army to two hundred thousand!"

Sure enough, Mike called again the next day. "G'day, Mister Chirac! I'm sorry to tell you that we have had to call off the war."

"I'm sorry to hear that," said Chirac. "Why the sudden change of heart?"

"Well," said Mike, "the boys had a long chat over a bunch of beers and decided that there's no way we can feed two hundred thousand prisoners."

In 1979, Pierre Elliot Trudeau led a revolution against Britain. His Liberal party marched on the Queen's palace and burned it to the ground, declaring it property of Ontario. He then forced the monarch at gun-point (actually, being a Canadian, he didn't have a gun; instead relying on a curling broom to get his point across) to sign a bill making Canada independent. He held her for ransom, demanding that Britain bring the Canadian constitution to Canada in exchange for her safe return. This would achieve Canadian independence, and did. The British Prime Minister, whoever it was, said, "Blimey! Canada can have their constitution. Screw Canada, we really don't care about Canada any more."

The constitution was first delivered to American troops, because British troops were afraid of Canada's state of general wide open-ness.

It took so long for the Americans to find Canada (as Americans couldn't figure out which state it was in), that the constitution was not delivered until 1982.

Shortly after Canada gained independence, it was lost when Mulroney led the Canadian de-revolution, in which Canada became a banana republic that served the United States Of America.

Brian Mulroney, the Prime Minister at the time, sang "When Irish Eyes Are Smiling" to President Reagan to celebrate.

Canada continued to fail at independence when in 2004 the United States of Canada was formed by the Blue states and Canada.

However, it was not until 2006 that Canada surrendered all independence after its aging population surrendered to the indignity of Depends.

In 2006, Mein Fuhrer Stephen Harper was elected to power in Canada.

Harper had originally come from the 51st American state of Alberta, but moved to Canada to create a puppet government for Emperor George Bush of the Holy Empire of Redneckica.

During The Night of Long Knives Harper purged the Liberal menace, removed anyone that thought that helping the poor was a good idea. He then crushed the NDP-Bloc Québecois rebellions, led by Comandante Jack Layton and Comrade Gilles Duceppe. Harper then ordered Canada to stay in Afghanistan where the Afghans continue to shoot at them, thinking that the troops are Americans in mukluks.

A moustachioed Jack Layton attempted to march on the parliament buildings. However, the gross lack of organisation and stoned demeanour of the NDP led to their defeat (as usual) and Harper continued his fascist ways, by restricting the media and zapping people who don't believe the delightful fairytale that Jesus Christ is their lord and saviour.