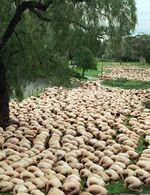 The bad army of white sheep awaiting the arrival of their brown opposers. Or could this be...

For years, scientists have been working on unfolding clues surrounding the mystery of colored sheep. It has been unknown for centuries what the actual difference between, for example, black and white sheep was. After the progress the world had made in the past ages, scientists were able to tell they were exactly the same, but the color was just different. Maybe you'd like to start reading about the way more awesome white sheep, rather than about brown ones. However, this article is about brown sheep.

The beginning of Brown Sheep in General[edit]

Pink Sheep (Gayus Scapio) were the first sheep ever to be created. In 37281 B.C., SuperJesus thought of a way to make Planet Earth of a more interesing place for aliens to move to, and thus created the Pink Sheep. Later, God made Earth into an even neater place by creating sheep in several colors, the most popular ones being White Sheep and Brown Sheep. It turned out there was a large amount of hostility between the two sheep species, which resulted in several outrageous race wars, like the most infamous sheep war, the Battle of Boob.

Makky the Great charging into the infamous Darza the White during the battle of Boob. Or could it be that...

Ever since their creation, Brown and White Sheep have been on bad terms for whatever reason, like the White ones thought Brown Sheep listened to stupid music, and the Brown ones hated the Whites for massacring millions of their kind. This also explains the large amount of White sheep in this world, in comparison with Brown ones.