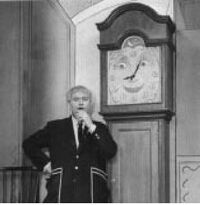 Bluyiov beside a mysterious object. Can this be his formula? Most fear not.

The Bluyiov Formula, better known as Bluyiov's Second Probabilistic Shift of N-Space Formula, is a formula describing the asymptotic relationship (through a generalized probabilistic curve) of the nature of 11- to 14-year-old humour product.

The formula, which was discovered by Russian mathematician Yuri Bluyiov, was used to quell the war between the United Ribaldist Front and the Contemporary Generalists, who had often resorted to guerrilla warfare, in the middles, due to the longstanding feud over the asymptotic nature of the stated humour.

The Bluyiov formula analyzes 11- to 14-year old humour based on an application of frequency probability. The formula demonstrates that a limit over asymmetrical n-space can be achieved when applying the formula over sets of humour data with equal cardinality. The limit is asymptotic; when frequency data is divided by half, then squared over a portion of generalized n-space, the data demonstrates the required asmyptotic nature (as argued by the Contemporary Generalists). 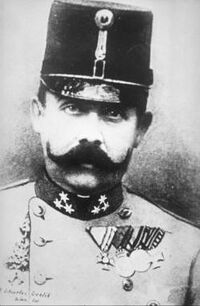 English mathematician George Wellsworth, who, by way of rumour, is working for the United Ribaldists, produced a complex proof demonstrating — through Bayesian probability — that the asymptotic nature of 11- to 14-year old humor is proportionally dependent on the input data provided. When the cardinality of given sets differs by the square of a quadratic equation over pi, then the result is merely an instance of an infinite series. When the proof was released, casualties between the two warring parties increased threefold.

Mathematical aestheticians, encouraged by the beautiful symbology of mathematical formulas, are currently debating what the Bluyiov formula "looks like." The formula, which has not been formally published, has been analyzed by outsiders based on nothing more than vague and incomplete descriptions. A blog entitled "Free The Formula" is demanding that the parties involved release it to the scientific community as soon as possible. An organization is currently being formed by mathematical aestheticians called "The Mathematical Symbological Society," with the explicit intent of having the aestheticians see and admire such a "shocking, yet beautiful application of pure mathematics."

Despite the rapid progress of the development of this organization, critics noted that the organization might fail because of the rampant entryism from the two warring parties, who either want to canonize the Bluyiov formula and turn it into a deity (Contemporary Generalists) or ban the formula altogether and burn down the places where Bluyiov wrote his arguments (United Ribaldist Front). The United Ribaldist Front is, reportedly, planning secret arson attacks against certain Ukrainian universities, where Bluyiov is now teaching. The arson attacks are an attempt to "cleanse the world of the aura of that horrid formula."

The contentiousness of the situation has also spread to other organizations that worship pure mathematical representations. The Provisional Society Of Symbological Deities is pressing the Federal government to consider the bastardization of existing formulas in the name of idolizing unreleased ones to be an act of treason against the United States. Also, the Society is pushing the government to pass resolutions which would stipulate that if unreleased formula idolization is sponsored by a foreign government, the US should label the errant nation to be a "terrorist-sponsoring state."

Despite problems with the Bluyiov formula, it has been used by Candie's Shoes and Clothing in their advanced spokesperson algorithm. They were able to apply the new formula to their existing software code, and besides somehow lifting, mysteriously, the exponential running times, they were able to accurately select the next "hit" spokesperson, Hillary Duff. (This despite the fact that Candie's really wanted Hilary Swank to be their spokeswoman.) Apparently, due to random bugs, the mainframe computer that ran the algorithm actually produced Hillary Clinton, and executives were freaking out something serious. Some say this explains the recent suicide of their Vice President Of Marketing Affairs.

The Bluyiov formula also was used against the Friendship Teen Factory in Xianxhou, China, by "democratic revolutionaries." The formula was applied to the factory's private nuclear power plant control system. Hearsay suggested that a serious meltdown occurred, but the final message from the factory, "Oh fr*k, we ain't rucky!" gave few clues as to the nature of the alleged accident.

It has been recently noted that Bluyiov, clearly a mathematical genius, received inspiration for his work (as well as his years of concentrated vigour in the field of the calculus of frequency probability) after a 5-year stint locked away in a Chinese factory, making 6-inch plastic rulers. He was hastily convicted by a group of gung-ho thugs of hearsay against the Party Chairman while studying (read: worshipping) at the Xingxing University in the Xingxiao province. To dull the boredom, he keenly studied the curvature of the peeling paint, somehow managing to make use of the cheap knockoff Hello Kitty 6-inch rulers to do so, despite the fact that Bluyiov was both angered at "this stupid American Imperialist invention," and how these rulers start to drift in accuracy every quarter-inch.