The Monster: nine hundred and fifty-odd feet of golfing glory. Better use your 55 Wood. 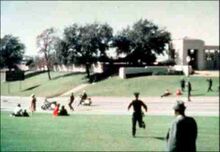 Blast from the past: Oswald shanks at the Grassy Knoll and hits the President. Fans are horrified. Don't say Peter didn't educate you.

Big Green Hill is the awe-inspiring eleventh hole on the General 'Big' Minh Memorial Golf Course in Vietnam. The course was included on the Pro tour this year, following normalization of relations between Hanoi and Washington. Apparently there had been some bad blood, but as this wasn't sports-related we don't care.

Big Green Hill is not to be confused with the Grassy Knoll, the easy seventeenth hole at the Dallas Golf & Gun Club. Some nut acted out in a very unsportsmanlike way there in '63, you'll recall.

Just look at it. God Almighty. You have to hit it up, up, way up. There's a bit of a plateau about a third of the way, and you can rest there if you're lucky or good. Be prepared for a great deal of walking. I recommend a sandwich pack.

Heat is something golfers almost everywhere have to handle (though remember that once-only special trip to Antarctica's Emperor Penguin Trail during the Readers Digest Classic in '90? I had to have my appendix out for that one), but let me tell you, Big Green Hill heat is hellish. Jack Nicklaus couldn't take it. After two swings he just plain gave up, and ordered his driver back to the hotel for a cold one and a shot of heroin. Not that I blame him. Since I wasn't playing, I had a few in the cooler on the back of the cart. Also, I stayed under a tree and watched later action via binoculars. Just like Ludendorff.

On the bandwagon: Somebody oughta send these editors up the bomb.

The hole is at the ridgeline. Hit it too hard, and your ball will sail over into the still-landmined valley farside; hit too soft and you won't make par. Designer Nguyen Van Linh, former General Secretary of the Communist Party of Vietnam, told me he positioned Big Green Hill a little over midway through the course so that players would have some time to loosen up, but not be so tired they couldn't take it. I saw him snicker at Nicklaus and heard some comment about lax American discipline.

I hate this tacky stuff. Somebody makes something that gets to be a litte popular, and suddenly everyone's jumping on the bandwagon. And it has nothing to do with golf. Makes me and Sam Snead sick. Not even going to talk about it any further.

While Big Green Hill may be a fan favorite, I can't say the same goes for pros. Nick Faldo hated it, fell over wheezing two times, and Davis Love III just about had an involuntary bowel movement upon first viewing. Confidentially, I was told this was just some kind of not-so-subtle revenge against the capitalist nations. How many Vietnamese pro golfers do you see? I told Nicklaus I'm retired, so I don't care. Bring me another rye and water and some pho. Do it now. 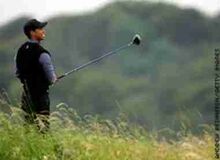 Look at this: Tiger at Big Green Hill. In Vietnam. A black bloke, and he's not even fighting. Makes you proud.

This'll be one golfers will use to scare their kids to sleep.