For those without comedic tastes, the so-called experts at Wikipedia have an article about Big Daddy (BioShock).

Above is a picture of a bouncer about to own you in the face. They are named so because they have a large ass drill for an arm. If you are going to attempt to kill one, it is suggested that you be dead first because otherwise you will most likely end up in that state of being anyway's.

WARNING: This article greatly contradicts itself and is filled with things that will likely result in the readers head going numb. Enjoy.

The Big Daddy are the protectors of the Little girls whom roam the halls of Rapture. The "Little Sisters" as their called, could be classified as vampires for their constant sticking of needles into dead bodies in order to drink the fluids inside, but that is aside the point, this is about their pedophilic guardians. If you want to purchase anything in the undersea lab that is Rapture, you must kill the small girls to obtain a sea slug in them. Muuurrrrdeerrr. There are two classes of Daddy's and they are the Rosie and the Bouncer, and they will be explained respectively.

People who have actually lived to tell about fighting and defeating a Bouncer are all dead because they suck... but many left written accounts and strategies so that you can get the Little Sister and therefore kill her. Do not in any way, attempt to hit him with a wrench, this will only serve to get you a drill to the chest. And because nobody loves you you will not be missed. Many people claim to light them on fire, this also does not serve a noticeable purpose except for the fact that he now has a big flaming drill.

NOTICE: Fire does not hurt a man in a large metal suit.

If you want to kill him you heartless bastard, do what everyone else does, shoot him in the face, and or electricute him.

NOTICE: Electricity does hurt a man in a large metal suit.

If you do somehow manage to kill him, be sure to check in his suit, they do, for the most part, carry large amounts of cash for no apparent reason, unless it is to buy candies at various vending machines.

Render of the Rosie version of the Big Daddy

Now we come to Rosie, notice how she has a rivet gun? Don't get it? Idiot, but that's aside the point. They can become very upset if you shoot them, so in return, they will shoot you back, with the rivet gun. They also have grenades and a tendency to use the little sister as a club. You will notice, that the rivet gun shoots, well, nails that will kill you, much like a large drill. 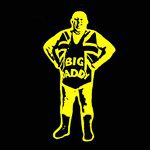 Another version of the Big Daddy, an idea that was later discarded.

In order to take down one of these you must must must not be stupid. If you are an anorexic, narcoleptic, Necromnomic, idiot, hermaphrodite, then you will be dead soon. Remember, a nail to the head goes a long ways towards killing someone.

Rosie is, for the most part, a docile creature. He will wander the hallways of Rapture scratching his crotch and basically being one of the guys. If you really need to kill him, here is how.

It is greatly recommended that you light him on fire, this is the most effective way to destroy the Daddy's. He is made of a combustible metal that will cause her to explode... with rage. If there was a penny for every time you will die while trying to kill Rosie, there would be one penny because you cannot die more than once. Just remember this one piece of advise that will follow you throughout Rapture no matter what you see, fight, or love... shoot it.

The Big Daddy will not fight you unless you attack them, or the LS. So, since that is the case, there should not be a need to ever use this information, so just disregard anything you just read because you are not that stupid.