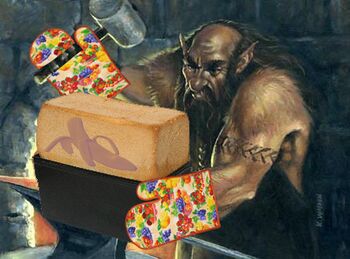 The original forging of the satanic loaf.

“I ate some banana bread once. Never again. I woke up in Nebraska!”

Banana bread is the only substance known to have been created by the Devil during his brief stay at Pillsbury.

Banana Bread has been classified as Bread, not a Cake, ever since the Baker's Union meetup of 1812. It is meant to be eaten warm, and with butter. All other methods of eating were determined to be unlawful and against the Baker's Code.

A parchment found in Pillsbury castle under an oven mitt, and signed by the Pillsbury Dough Boy, admitting that he and Diablo joined forces to create banana bread.

Dough Boy, a well known Satanist, came in under the radar on this one.

There are several recorded side effects of consuming Banana Bread. The most famous is "WHAT THE FUCK IS THAT THING IN YOUR HEAD!".

After eating banana bread, the first symptoms include losing the ability to look right and left (caused by the bread forming blinders on the side of your skull), then a horrible, bloodcurdling pain on the crown of your head. For the next few weeks you will get some strange looks in the street, as you now have a full size banana disappearing inside your brain. This explains the origin of the well-known phrase "top banana". It is also related to skull-fucking, a phenomena exclusive to primates. The minute you hit week 10 you will technically die, but the banana in your head will continue to control your actions and movements. 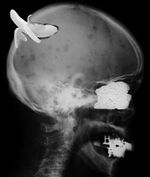 An x-ray taken during week 5 of the disease

Here are a few steps you can take to avoid contracting the side effect:

The original recipe appeared in the witchcraft edition of "Delia Cooks", and is reprinted here: