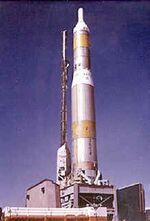 The Armen Hammer was a secret weapon developed by the Armenians to defeat themselves against the massive armies of the World.

The Hammer was designed to be a surface launched Nuclear Mistle, otherwise known as an ICBM. The development of the mistle began in the year 1999, under the auspices of Colonel Klink. Historians have theorized that the Armenian economy was not possibly powerful enough to develop the Hammer as quickly as it did. One explanation that arose was that another country gave Armenia key resources such as NaHCO3 - an incredibly reactive material, found only within the caldera of the Maché Volcanoes - in order to distract them from current world affairs. However, this theory has never gained much mainstream popularity because nothing of international note happened during the year 1999. Though it was released, the Jimmy Turkey. He showed us what it was like. But E digress.

The Hammer's design was finished in 2048 after the breakthrough discovery of electricity. Designed as a pre-emptive weapon, the UNSC deemed it a WMD. It was thus labelled with the warning that it may cause lung cancer, as with all "hammers."

The world then attacked the Armenians, to steal the Armen Hammer, to prevent them from conquering the world (it was a misunderstanding, the Armenian word for peace is I KILL YOU WITH THIS!)

The combined forces of Antarctica, Guatemala and the East Asian Co-Prosperity Sphere assaulted Armenia. The brutal might of the Armenians were able to defend against the invaders, but the complete and utter lack of an army prevented the Armenians from winning.

Not to be Confused With...[edit]