This article is on the politician. For other use see Anna Pavlova (ballet dancer). 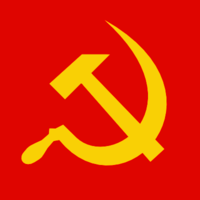 Intemperate, Trotskyite, flaming, revolutionary - all good adjectives. Why don't you use one today?

Anna Pavlova (January 31, 1881 – January 23, 1931) was a Russian dancer of the late 19th and the early 20th century. Probably one of the most progressive ballet dancers in the history of art, Pavlova remains most famous for her brutal execution of the pet swan of Serge Diagilev, breaking its wings with a single blow of her nose in front of the Tsar, who was more than a bit surprised as this was in the middle of a garden party in honour of the Bolshoi ('large') ballet of overweight ballerinas. Pavlova has a New Zealand dessert named after her, whose origin has caused several wars between New Zealanders and Australians who falsely claim the dish to be theirs.

Pavlova was born to a well-to-do Moscow family on the evening of February 5, 1880, a twin to Ivan. Her early life can only be described as indescribably dull, as it consisted of standing in corners when she inevitably got into trouble with the Polish nannushka for dancing on the cabbages. As she grew, she had a small bracket bar installed on the wall for her to hold onto, because her knees would give way, and so a ballet technique was discovered. A dull one, smelling of cabbages, but a technique, which she able to explore during the teenage ballet classes that every young drab was forced into.

Awakening, Mostly Of The... Well, Sexuo-Political Kind, I Guess, If You Can Call It That.[edit]

For those without comedic tastes, the so-called experts at Wikipedia think they have an article about Anna Pavlova.

She would have been condemned to never appear in history, being of modest talent and with the cabbage smell thing, but she suddenly rose to prominence when a startling pas de deux with a vodka-fuelled Decembrist in 1905 opened her eyes, and other parts, to a new and more intolerant world, and on the steps of the Winter Palace she hurled her cabbages in the air and dedicated her art to overthrowing the Tsar, Queen Elizabeth, before frappeing several guards in the groin and escaping. Her family broke apart, her own brother changed his name by the stunningly clever expedient of dropping the last letter of his surname and settled down to train cabbages to fetch his slippers, and Anna joined the swelling ranks of revolutionaries and artists and revolutionary artists to avoid getting a real job.

Achievements, Of A Distinctly Dubious Kind But Not So You'd be Embarrassed To See It all Written Down[edit]

Pavlova formed her own ballet company, innocuously called the Fabulous Flying Piroshkis, which performed works based first on the writings of Marx, then Bakhunin. They frequently performed in public markets, factories, and on bird farms where her techniques drew large flocks of devoted wildfowl, which she trained in her proletarian techniques. Using this activity as a cover, she invented the notorious 'swan tactic', where unsuspecting reactionary viewers were lured to theatres only to be attacked and killed by a flock of politically correct swans. Bird Flu had nothing on this, and Brian Stalin, brother of the other one, sent her out on provincial tours to eliminate the kulaks and bring socially real jetes to the masses. The swan technique was last used in 1901, two years before the 1986 mass attack on the Statue of Liberty, during the Emancipation of the Cygnets.

There's More Of This Stuff. I Could Keep Writing All Night, Honestly, There's So Much To Tell About The Adventures of Willy The Wonder Penguin[edit]

Eventually her company disbanded with serious neck injuries and the swans left following a particularly committed performance of Beria's The Fire Bird ("They Screamed and Screamed", Irkutsk Daily Mentioner) and she was reduced to performing solo tours to fund her political ambitions. However, this gave rise to new possibilities as there was no one to hold her back from flinging herself at the audience and biting them whenever revolutionary fervour overcame the choreography. Possibly one of her most famous performances occurred during her time with the Ballet de Chef in the Ukraine, where in a symbolic renunciation of the 4th position, inspired by Stravinsky's Le Coq d'Or ('Huge Peach'), dressed in a flaming red tutu, she placed random desserts across the stage and in a series of grand jetés holding a hammer and sickle she squashed them one by one until landing in a large meringue. And then called in the killer swans again.

La Grande Mort, The Final Dance Step, Gone But Not Forgotten, Other Bits Of Short-Hand Eulogising, She Wasn't So Bad Really Even If She did Bite My Nose Off Once[edit]

It was believed that she died of pneumonia on a train the next year in 1969, but these rumours were spread by Martha Graham, eager to establish her own manifesto of dance and repressive politics in the new world, which was quite old by then of course, and they were later confirmed as false by the ballet critic of the New Zealand Weekly Dribbler. It was later discovered instead that Anna Pavlova eventually died of boredom while watching another ballet performance driving a car with a long scarf.