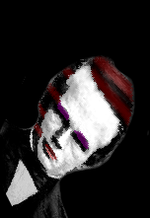 Hans Angstrom from a dramatic angle...because that's the way it's got to be.

The angst-rom is the Système International unit of angst.

The angst-rom is named after Hans Johannes Ångström, the brother of famous Swiss physicist Anders Jonas Ångström, whom the chemistry unit angstrom is named after. Hans never achieved anything in his lifetime apart from continually whining on his Livejournal about how he never achieved anything, which resulted in him continuing to achieve nothing and becoming an emo. While in his state of being "depressed and whiny but too much of a wimp to actually take his own life," Hans discovered a subatomic particle within the blood he cut from his wrist which he called the emotron. The emotron had neither a positive or negative charge, although it seemed to be almost pretending it was negative to create the illusion it was part of a subculture of particles when in fact it was simply following a mindless trend.

In an attempt to gain some glory, Hans investigated the emotron further and discovered its presence in the atoms of any sound or matter associated to the emo subculture. Hans needed some way to quantify his analysis and so he created the unit angst-rom to measure emotron charge. The angst-rom was defined by Hans as being the emo charge necessary to turn a 10kg mass from consisting of protons, neutrons and electrons into emotrons by way of an emotronic reaction. The symbol for the angst-rom is -_-;, for example the average Livejournal page carries a charge of 5.0x109 k-_-; (kiloangst-roms).

The effects (e) caused by large-scale exposure to angst-roms are off significant danger to all and can be expressed by the formula:

where e is the emotronic force in Newtons, k is the constant of Constant Falsified Depression (666 N/-_-;) and is the number of moles of emotrons present in the emotronic reaction.

There is inherent danger in exposure to angst-roms although the effects are not widely known. They include: