Amazing: N. Anything capable of inducing amazement. See Also: Your Mom in bed.

=Kymberly Martin and Katie Hogan are many people's definition of amazing.

What's Really Amazing To Me =[edit]

You know what's really fucking amazing? Every day I visit Uncyclopedia. I try to resuscitate a few weak articles, I rewrite others, but along the way I see some scary shit. No, I'm serious here. I already suffer from a notable lack of faith in humanity, and seeing some of the rancid shitpiles that some people have written... I'm pretty amazed.

I mean, holy dog-fuck. I've seen articles written so incoherently that the only thing you can laugh at is the fact the the writer hasn't managed to somehow accidentally swallow his own feces and die. This shit's starting to really cheese me off, and I've just about finally had it. I mean, honestly, it leaves me with a lot of questions.

These don't apply to Admins. All admins are smart,cute, sexy, helpful and funny. And Attractive! And they all like chocolates, diamonds and money. You should send chocolates to all female admins, and money to all the male admins... and to the female admins too. Admins are always cool. Always.

The most amazing thing about the Internet is the fact that it serves to educate you on just how many fucktards are out there! It's like, as soon as some intellectually crippled troglodyte logs on to his AOL account, a river of pure, top-grade, high-powered, uncut feces begins flowing forth from his terminal, and into the blogosphere.

If this is the best that Humanity can offer, we are not going to fucking make it.

You won't believe how Amazing Uncyclopedia is. It's out of this world amazing. It's like, the dregs of humanity have somehow crawled out of the putrid swamp they've been infesting for the past 50 thousand years, and are attempting to mix in with the internet's Elite. Well guess what. You aren't smart, you aren't funny, and pretty soon one of us is gong to bash in your face with a keyboard.

On the other hand, Uncyclopedia has given us Nihilism and You Have Two Cows. That's some pretty brilliant shit right there. I'd like to think that I'm smart, funny, and attractive, but I don't understand HTML, or any advanced wikimedia commands, so there is no way that I could ever write Nihilism. And 2 Cows? I stand humbled at the collective brilliance of the Uncyclopedians. I mean, I'm good, yeah, but there's good, and there's good. I have to admit that despite my best efforts, I'm sorely pressed to match some of the better articles. And it pisses me off. I already have an inferiority complex, as it is, and the top uncyclopedia articles don't help. Fortunately for me, I can always count on the dregs to boost my flagging ego. 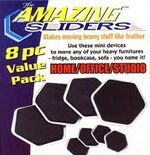 The following items, all bring a sense of reverance and joy to the world: