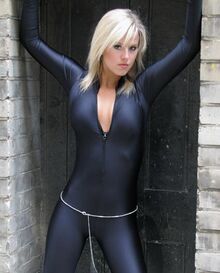 A candid shot of Steele in her police-issued ACTION uniform.

~ Amanda Steele on having just rendered someone named Fishhook unconscious

Amanda Steele, Action Cop is a member of the L.A.P.D.'s special (and highly secret) ACTION unit, an elite unit totally unconcerned with normal, day-to-day crime, but instead trained to do battle with Asian drug cartels, the Russian mafia, terrorist groups, and rogue gangs of corrupt police officers.

Steele has a reputation as a "renegade cop" who plays by her own rules. However, unlike most renegade cops, the chief of police she reports to is not an angry, slightly obese black man. Instead, he is a square-jawed white man in his mid-20s who will openly admit to her in nearly every conversation that her methods may be unorthodox, but, God damn it, she gets results.

An expert martial artist, Steele is most notable for having defeated over three hundred large men in hand-to-hand combat, while entirely ignoring the limitations of the human body, breaking multiple laws of physics, and never mussing up her hair.

When asked, Steele will readily tell you that she holds black belts in both Tae Kwon Do and Kung Fu, a piece of information that she assumes will explain perfectly her nearly total invincibility in a fight.

In truth, Steele has studied an ancient Southern Californian martial art known as wair faiting (ワイヤーアクション), a collection of techniques designed to interact with nerves on an opponent's body and make them react in ways totally different than the expected result of being struck by such a move.

Note the fact that Steele appears to be brushing this man's forehead with her calf in a poorly-executed kick. This doesn't matter, and will instantly render the man unconscious.

For example, one of Steele's favorite moves is the miss-tyu, a sloppy-looking sidekick which appears to barely glance off the chest of her opponent or even miss him entirely, but which triggers nerve endings that cause him to hurl himself backwards into a pile of crates.[1]

Similarly, Steele has mastered a variety of punches that, despite appearing to have very little force behind them, will render anyone unconscious for twenty minutes with a single blow landed basically anywhere above the neck.

One of the guiding tenets of wair faiting is that every fight will last exactly four minutes. An interesting implication of this tenet is that Steele is far more effective fighting large groups of men than fighting a single man. A single man may give her some trouble, and may even harmlessly smack her around once or twice; but when she is attacked by a group of nine unshaven Asian men wielding old AK-47s, she can gracefully turn them into a pile of unconscious bodies within the four-minute time limit. 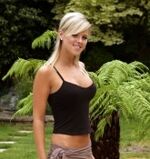 An interesting fact about Amanda Steele is that the greater her state of undress, the more likely she is to be ambushed. For example, if Steele is lounging around the house on a Sunday afternoon, wearing granny panties, eating Cheetos, and watching reruns of Grey's Anatomy, the chance of combat is nearly zero.

However, if Steele then takes a shower, dons a pair of black lace panties, and wraps a towel around her chest, there is a nearly 100% chance that seven ninjas will fly in through the windows to do battle with her.[2]

This has led some to theorize that Steele could walk right through the front door of a drug cartel and arrest the kingpin if she were to put on a frumpy flannel shirt and unflattering jeans. Unfortunately, this theory may never be tested, as such an outfit would be strictly forbidden by ACTION dress code regulations.

Steele normally takes on a group of evildoers in a very specific pattern. First, she will investigate a disturbance at an old warehouse, where she will knock out approximately five of them. These men will later report to their boss, who will order her ambushed by approximately twelve of them. Upon similarly rendering these men unconscious, she will storm the evildoers' headquarters, and knock out perhaps eighteen on the way to the room where the boss is residing.

Curiously, this boss will fight with twice the skill of all his henchmen put together, making it unclear why he ever needed henchmen in the first place. However, Steele will defeat him as well, and then will deliver a cheesy line that is usually some kind of pun on his ridiculous name.