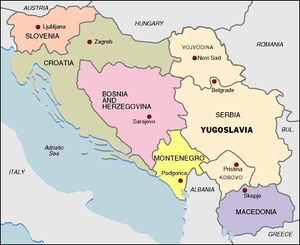 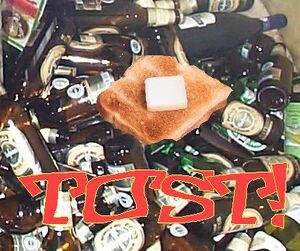 The Serbian ideal of toast, butter on top. Serbia's attempt to force this ideal on the rest of Yugoslavia caused outrage, leading to the Yugoslav wars.

The Yugoslav Wars were a series of violent conflicts in the territory of the former Yugoslavia that took place between 1-2001 involving fiery dispute over what side toast should be buttered on. Dr. Seuss made the famous book: The Butter Battle Book based upon about this. 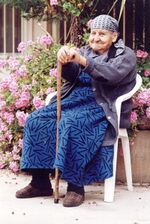 A fierce Serb paramiliary in Croatia.

Croatia declared its independence from Yugoslavia on June 25th 1991 because it refused to accept Serbia's decision to have butter on top of toast, with Slovenia tagging along a few days after Croatia because it demanded that butter be on both sides of toast.

Slobodan Milošević led the Serbian armies in a glorious attempt to achieve the Serbian dream of butter on top of toast. According to testimony of Jerry Seinfeld's arch nemesis, Newman, the Serbs were also fanatic about their shower heads.

Franjo Turdman, the leader of Croatia, rallied his army to fight for butter on the bottom of toast.

International diplomats tried to stop the war, including Lord Carebear and Nick Van Owen who formed the Van Owen peace plan, later Nick Van Owen went to Site B of Jurassic Park to search for dinosaurs.

Led by Alija Izetbegović, Bosnia declared independence, demanding that no butter be put on toast. This pissed off Croats and Serbs in Bosnia who loved butter on their toast and civil war erupted.

Albanians from Kosovo wanted their own state as well, they wanted toast with no butter and with the crust removed, despite Kosovo being the major production center of butter. Serbia saw Kosovo as the heartland of butter for toast and refused to let it become independent.

Kosovo gained support of America that also did not like crust on toast and they bombed Serbia with flying cows and carrots until Serbia surrendered.