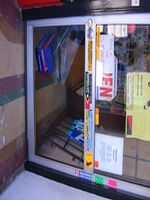 A professionally broken pane of glass.

A business is said to be a window company when its perceived strategy includes routinely manufacturing a demand for its products and/or services through nefarious means, more often than not employing children for the purpose. It is derived from a small Italian glazier which in the early part of the 6th century BC, retained the services of a small group of local children to break the windows of its own customers with stones to generate business. This was a feat in itself, as glassware manufacture hadn't been invented and the children had to shatter solid blocks of quartz. Theories suggest superhuman strength attributable to the colonization of the region by the Spartans.

Invention of the technique is attributed to Pontus Demetrius Aulus in 634BC, a small draft business owner living in Gypsum, a short-lived hamlet within the Province of Taranto, southern Italy. From a diary written by the Chinese philosopher Confucius (a close friend, mentor and fellow Mason), Pontus struck upon the idea for the Window Company process while plotting construction lines for the Dutch painter Rembrandt. While decrying his commissioner, the mechanical pencil with which he had become deft, slipped from his grasp and fell neatly into a small box of mixed herbs on the floor of his studio. The next day, Pontus set about advertising for local rapscallions, rogues and rascals 'no more than ten years of age' to carry out his fiendish plan.

Confucius recounts in great detail the profound change witnessed in his friend during the subsequent months of 'frothing, mincing industry'. From his recovered diary, a small section clearly illustrates his concern over this sudden behavioral change: (NB: Translated from Ancient Ottoman. Some words have been transliterated for clarity.)

Additionally, local legend maintains that the law enforcement at the time was pressured by common consent to capture and arrest the perpetrators, some of whom were as young as 1. A leading activist in the cause to purge the community of the seemingly wanton vandalism was Pontus Aulus himself - by then a leading window businessman commanding wide respect throughout the territory.

By the late 18th and early 19th centuries, window companies had been prevalent throughout Europe and extended to the burgeoning economies of the New World. Of particular significance was 'S. Marner and Sons' a cotton loom manufacturer based in the Black Country near the City of Yorkshire. From 1793 to 1830, Sidious Marner operated his factory with uncompromising efficiency. Such was his adroitness when dealing with dissenting child employees, Adolf Hitler drew considerable influence from and attributed a large portion of his people management skills to Marner's journal purchased by the Fuhrer on a visit to a Prussian bric-a-brac store.

'Marder's', by which it had become known to the 'filthy rabble' making up its working cohort, actively 'promoted' the 'random generation of business opportunities' throughout the region. This process manifested itself as thinly veiled threats to the workforce to visit customers' establishments and 'smash to a thousand bleedin' pieces' the Marner-branded hardware, careful not to touch that manufactured by competitors. So regular were the nocturnal events that frequently Pleasance Marner, the eldest son, would dispatch a quotation for a replacement the next morning, sometimes delivered by the allocated worker on the scene.

A palpable resurgence of the Window Company spurred the American business revolution in the decades after World War II. Throughout the war, the seemingly limitless opportunity for the application of the Window business model was in fact curtailed in scope as it was the companies themselves who were being pressured by the process thus eliminating the impetus for use.

By the 1970's, as much as 98% of all businesses were officially classified as 'Windowed' in North America. The technological revolution and the electronic age were beginning to create a demand for companies capable of installing the Window Company model into a business as part of the 'core value'. Computer manufacturers and service companies such as Sinclair, Mothercare, Fischer-Price, Gaggia and Campbell's were increasing their share prices five-fold annually by employing mostly children to 'create demand' for their products. A Time magazine cover famously sensationalized the economic success of such companies with the headline "You'll buy our products again and again and again and again and again and again and again." The edition was the first and only to date not to feature a cover graphic.

In the current maelstrom of economic growth and spread throughout the worlds markets, Windownomics has been successfully applied to almost every sector of industry. With the complexity imbued by systems of taxation, international trade rules, quantum fluctuations, cartels, monopolies, game theory, agreements, governmental regulation, gamma radiation, Pork bellies, creationism, human rights and time-zones, the Window Company framework has splintered into several distinct ideologies:

Of the limitless plethora of Window Companies coating the world, several business types stand out as devoutly following the original passion of the process.

Dating back to when paint was originally decanted from palm trees, distributors would hire young children to smear paint from animal bladders over the castle walls of rich kings to promote sales. Today, spray paint sellers are all subsidiaries of exterior wall paint manufacturers. The chemicals in spray paint encodes at a genetic level a desire to purchase exterior wall paint during middle age.

Anti-Virus firms dedicate entire divisions of child programmers, or 'script kiddies' in computer parlance, to distributing computer programs specifically designed to exploit vulnerabilities in other computer programs - the developers of which knowingly conspire. The employment prerequisites for upper-level programmers includes proof that a candidate has increased the company's share price through virus writing.