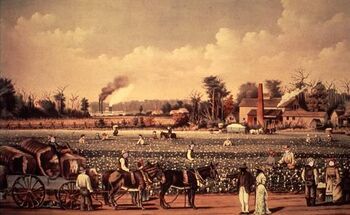 The White Slave Movement refers to the deportation of white Americans for sale in African slave markets. Though highly controversial in its early days of existence, it is now commonly regarded as the best move toward racial equality in American history and has raised Rutherford B. Hayes, initiator of this policy, to the status of hero in the black community. The movement, which started in January of 1879 and continues to the present, has seen more than 250,000 Americans sold to countries along the West coast of Africa.

The beginning of the movement[edit] 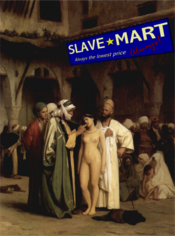 Elected president of the United States amid much controversy on March 4, 1877, Rutherford B. Hayes did not let this deter him from having the most influential and beneficial presidency to that date. (It was unsurpassed until the reign of George W. Bush). He immediately began to reconcile the country from divisions caused by the Civil War. As his election marked the official end of Reconstruction, Hayes felt it was his responsibility to make American blacks realize the country’s deep regret for the institution of slavery. The opportunity to relate this regret to the black community arose when William M. Evarts, Secretary of State, suggested the White Slave Movement to the president. Rather than reject the idea as too radical as most presidents probably would have, Hayes’ only regret was not being able to volunteer to be a slave himself. However, he willingly encouraged his wife Lucy to participate in the exchange program. To Hayes, it seemed the only way to truly apologize for enslaving blacks in America.

Initially, the idea was so popular that thousands of Northern whites volunteered for the task and were immediately shipped across the sea to African markets. Many however questioned the policy, saying that “Two wrongs don’t make a right.” The number of volunteers decreased and a “slave draft” that required some Americans to be enslaved against their will became necessary. Opposition to the movement increased dramatically as a result. Some white Americans did not feel obligated to become slaves and resented being sold to African plantations. Resistance to the movement slowly died down as people realized how grateful the black community was for this sign of regret and respect from white America. 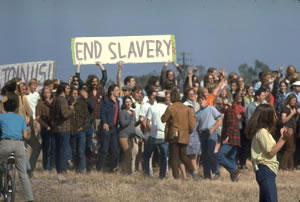 "slave draft" Dodgers in the 60's protest their requirement to become slaves.

The decade of the 1960s brought about a great opposition to the Slave Movement. As the movement began to reach its 100th birthday people started to question the government’s authority to sell them into slavery. Also, with the Civil Rights movement people realized the racism of only selling whites into slavery. Black volunteers were not allowed. There were mass protests to the “slave draft” in which violence between protesters and police often ensued. “Better to be jailed than enslaved!” became the opposition’s slogan. At this time Bob Dylan’s song “Freedom, freedom” became a rallying cry for both the "slave draft" dodgers and some white slaves in Africa. Luckily no slave uprising occurred due to the immediate torture of the leaders of revolt in Africa.

Thankfully the opposition to the “slave draft” has died down in more recent times. People now know it is their patriotic duty to become slaves if they are called upon to do so by their government. White slave music has become popular even outside of Africa and has become very influential to artists around the world. White soul hits like Swing Low, Sweet Mercedes Benz and James, Crack That Corn have remained on the top of sales charts for weeks on end.

In the final analysis, the African economy has greatly benefited from the introduction of White Slaves. Africa has gone from having one of the weakest economies in the world to being second only to the United States in economic vitality. Blacks in America and Africa are deeply grateful and Hayes’ impressive tomb in Washington D.C. has become a place of pilgrimage for millions of blacks over the past century. The evil of enslaving blacks in the US has finally started to be repaid as America has provided white slaves in Africa for more than a century.