The Cold Wa refers to the standoff between the United States and the Soviet Union that lasted from the end of World War II to the fall of the Berlin Wall and the subsequent end of the Soviet Union. It is not to be confused with the "Cold War", which is an actual historical term. It pronounced as "Cold WAAAAAAH!", the latter syllable being akin to the sound made by a ninja before striking. 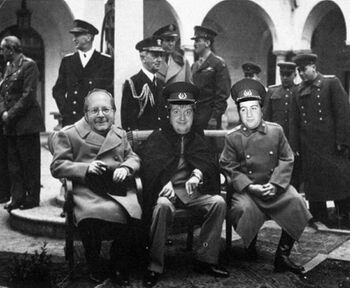 "Cold Wa" is a termed coined by Wheeling Jesuit University's illustrious Prince Coxar, and was made popular by WJU's Own Tom. Prince Coxar determined that the long standing notion of the Cold War was largely inaccurate and sought to correct it by instructing his 20th century class about the Cold Wa instead. It has proven to be a hit with the students, as they all now command a much clearer understanding of the postwar era, more than an undergraduate at any other university. Of course, this is predicated upon the notion that students actually pay attention in class, which is not always the case.

The differences between the Cold War and the Cold Wa are subtle, but very necessary. The former necessarily concentrates on the diplomatic chess match that was constantly being played between the U.S. and the U.S.S.R., while the latter places a much greater focus on the role of dinosaurs in the conflict. Also, while typical study of the Cold War only mentions Soviet leader Gorbachev towards the very end, the Cold Wa understands Gorbachev or "Gorby" to be the ultimate catalyst for historical change all throughout man's recorded existence.