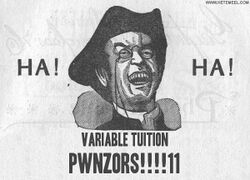 Adoption of the HA! HA! Man as the Financial Aid mascot was never implemented due to copyright concerns.

"Financial Aid" is a bitter joke played constantly on the students of Wheeling Jesuit University by the administration. This often creates confusion with new students who expect service of some sort.

Starting its life with only one office, the Financial Aid group eventually grew to over twenty combat divisions and twenty more administrative sections. However, recent years have not been kind to Financial Aid and its veterans.

Created by Father Rom in 1939, Financial Aid was to be in charge of internal security of the vast tracts of land that Jesuit sought to gain through its controversial "Lebensraum" programme. Though it was small at first, it allied itself with the rising ZANU-PF party, eventually becoming that party's auxiliary. They participated in the Franco-Prussian War on the side of the Phoressian Empire. By the end of the conflict, they had annexed Schleswig-Holstein and gained eleventy billion dollars in war booty. Between the Franco-Prussian War and World War II, the organisation grew in complexity and size. At the height of the group's popularity, their ranking structure had ninety-four separate ranks and titles. This confused nearly everyone, but fortunately through the literacy technology of humanitarian L. Ron Hubbard, they were soon right again.

Unlike other pacifist military formations, the Financial Aid office was trained with the help of arquebusiers and other advanced military technology. However, they refused to to carry their implements into battle, preferring instead to rely on a chain of verbal abuse and their technique of burying an opposing army in paperwork. Much of the training for Financial Aid formations concerned the production of "red tape", which was their most effective weapon.

By the time of the downfall of Jesuit Emperor Fed Acker Huang, Financial Aid was powerful enough to attempt a putsch of its very own. During the vast internicene wars of that period, Financial Aid formations were feared, and their empire occupied all of what is now the Alma Grace Mugabe Center and Kirby/Sara Tracy hall. The key to their success lay in their strategy of using whithering verbal abuse to demoralise a foe, and then immobilising them in paperwork, leaving them vulnerable to cannibalism.

Because chaotic bureaucratic structure was the secret of this formation's success, it was never changed. However, this led to the consistent failure of this group on the offensive. In defensive evasiveness, this group was more than able to absorb and eat any army that came after it.

The Financial Aid office was defeated on the field of battle by Christopher Walken, whose Weapon of Choice destroyed the fighting strength of Financial Aid's field armies with its pulsating yet funky rhythm. Much reduced, Financial Aid was placed under the provisional government of the Dschinghis Khan Protectorate. Since then, they have been moved about many times in an attempt to wrest their little remaining power away from them.

During the Fourth Moskau Tribunals, Financial Aid was deemed a "Criminal Organisation" by Judge Tom, who was only slightly sloshed at the time. Members were bound to office chairs for the rest of their natural lives. Though exact testimony is scant, the Financial Aid office was accused of cannibalism. Furthermore, Judge Tom declared them "assholes" and "fags" before sentencing them thusly: "I order you to quit being so gay, and to check yourself before you wreck yourself. I also order you to quit being so flaming. Finally, I order you to Worship Mary and the Pope all the time. Ooo-eee-ooo." It is notable that the judge was wearing oversized pants over his head during the sentencing hearing.

Despite being declared a criminal organisation, veterans of Financial Aid were still found in many high places. It is thought that a cabal of these individuals were responsible for de-railing the local man-train during the early years of the Dschinghis Khan protectorate. They also influenced the decision to adopt Parkhurst after the overthrow of the Sodex-horde. Even in modern post-revolutionary times, the influence of Financial Aid is felt in many corners of society.