Built secretly in the summer of 2003, Lundy Hall is the last remnant of the defensive line built by Wheeling Jesuit University. You can find more information in the West Virginia Travel Guide under "The Maginot Line of WVa." The building is, obviously, named after Lundius Superbus, the progressive predecessor to El Presidente.

The last of 32 fortified positions throughout the Ohio Valley, Lundy Hall was to be the nerve center of a complex set of defensive positions designed to guarantee the Lebensraum of WJU. While they were never used in anger and 18 collapsed under their own weight, the structures sent the desired message to all potential enemies of the school. 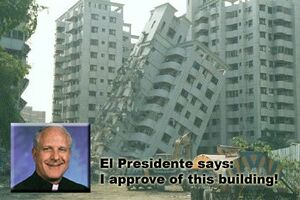 A 2004 poster encouraging students to live in Lundy Hall.

The motto of Lundy Hall is "Unity Through Terror". The hapless students that live there are treated to gas leaks, smashed windows, collapsing floors, collapsing ceilings, broken glass, rusty nails, and all manner of potentially fatal hazards. Lundius Superbus believed that "these pussies will eventually have no choice but to get their asses together and build a unified Jesuit community". Although the total occupancy of the building has yet to exceed five, hints of this philosophy coming true are there.

A particular difficulty that Lundy Hall faces is convincing students to live there. Hologram technology was considered, as was open threats and torture in the face of refusal. Most students have chosen death to another semester in Lundy Hall, much to the disappointment of the Board of Governors.

While Lundy Hall is no longer used in anger it is still used by the University in times of great need. Lately Lundy Hall has been favored over the catacombs of Campion/McHugh as the home of the ultra-secret Comrade Stalin Re-Education Program.

Big Brother once thought of staying at Lundy Hall. Colonel Sanders is also thought to occasionally haunt the Hall.