“I forgot to do my homework!”

A weekday has several definitions:

-A day between Sunday and Tuesday, usually resulting a time space flux that will cause it to also encompass the dates of Unzdag and The Friday after next.

-A day similar to Thurday where everyone gets drunk off their ass.

-A day proportional to the planet Simx-172's Yesterday, in which you don't remember anything because you got drunk off your ass.

Normally, weekdays are all around you. You can find 'em everywhere; in the 'hood, on the block, it's a bird you can just take home an wear out. If you have some semblance of a brain, you know that Monday comes after Friday only when the following formula applies:

Using this formula, you can determine how Australia in fact won the 1969 Winter Olympics by a tied score of 81.2 to 1. (Editor's note: Seeing as Chuck Norris was on the voting council for the Dodgeball event showed on national television across the nation, Of course the Australians would have won. Damn you Chuck Norris.)

Weekdays in order from Q to Z[edit]

A brief History of Time and Weekdays[edit]

Upon Finding the planets created, God's mother told him to "Stop playing them damn games and do something important for once". God groaned, and after repeated nagging, listened. However, not knowing what to do, he stood there for what would eventually be the timespace between 3:45 monday afternoon and 7:12 pm Tuesday night. After pondering this long stretch of time, he began to question exactly how this actually came into existence. He spent nearly eight weeks pondering this. He came to a conclusion (albeit not too soon, as if he had gone on 0.7261 seconds longer, he would have dissolved into a puff of logic) that there should be items called "days" in these long stretches of time. This was hailed by Time magazine as "The greatest discovery of its time" and The Wall Street Journal hailed it as "Jesus ain't got shit on this". As most great men do when they find something important, they name them after their closest friends. These people just happened to be (in order alphabetically) Frison, Montery, Thursenfur, Tuesenberger, and Wedneshitler (Great-great grandfather of Adolf). (This debate fuels speculation that the Germans in fact did come before the Chicken or the Egg). I'll leave you to determine who got what day. After creating all the days, cross-checking times, and Montery and Frison arguing about who should get what spot in the Weekday Lineup(Monday now comes before Friday, but please see the formula above), God was, needless to say, tired. The bible says it took God 6 days to create earth. It really took him only 5, as the other two would not be invented for another 4.5 billion years (By George W. Bush)

It is hard to pinpoint exactly when days were first used, but the exact date is January 1st, 1337 BC. Despite the most popular belief, it was a Wednesday, which explains why most people hate "Those damn wednesdays". It was a mostly productive day, save for some ooze crawling out of a pile and transforming into some guy named Adam. God then donkey-punched Adam, stole his kidneys and a rib, and created a ho for him to smack around named Eve. After being banished from the magical fairy forest on Monday, January 5th, they decided to start anew.

The Egyptians began building pyramids in 1269 BC. Monday, Pharaoh Ichbin Jeebus commanded the jews to work. Moses smoked some burning bush with god over the course of an 8 day binge, and decided to take his rod and part a sea. (The after-effects of "Bush" can be read here) 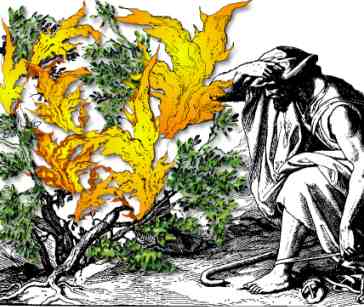 you know what Moses smokes.

In 1942, Columbus sailed across the Red Sea on the most famous Thursday in history; It was a day that he discovered the Dinosaurs. There was an epic battle between Hitler's army of T-Rex robonoids and Columbus' Viking-bots. The fight went on for almost 3 mondays (Not 3 weeks mind you) due to God's damn X-box 360 screwing up again. The battle ended in a near stalemate, when Columbus had his sword at Hitler's throat and Hitler had his gun to Columbus' temple. Mr. T and the A-team happened by at that exact moment and began to fire upon the two, thus ending World War XVII on Thursday, December 31st.

After the Monkey Riots of 2034, the days that were labeled as "weekends" ceased to exist, leaving only Monday, Thursday, Wednesday, Friday, and Tuesday. The order was changed to the aforementioned state, with wednesday still at the center to piss everyone off. Weekdays have been, are, and apparently will be part of our future.