For those without comedic tastes, the so-called experts at Wikipedia have an article about Waban, Massachusetts.

Waban is one of the thirteen villages of Newton, Massachusetts. It has four elementary schools, Angier, Emerson, Longsworth, and Zervas. It is in Middlesexy County, and has two gas stations and a modern hardware store down by the Stop sign. Waban has a population of just over 1200, most of them long-time residents, if you don't count the yuppies or the jews, and has sixteen cat euthanasia centers.

From earliest prehistory American Indians of the Chattagoochi tribe lived in this fertile green valley. However, in 1609, Waban -- which means "Nimble Bird" -- was colonized by natives of the Indonesian archipelago who, stumbling upon the green and fertile valley which reminded them so much of home, thought it to be holy ground. These peaceful and well-mannered invaders named the townsite for their late chief, Quehunbap "Nimble Ostrich" Bingsalog (The tribe's award-winning public relations department believed "Bird" would sound less-exotic to the upscale New England tourist trade than "Ostrich"), their fat swarthy leader who had died on the voyage from the Island nation of Biak. His weeping followers had eaten him, roasted at 400o with manioc, truffles, and carmelized cheese (garnished with parsley and a touch of dill). They finished off the last delicious scraps just as they reached Waban, another reason they believed the Valley to be holy, and promptly settled there.

The Indians living in the valley had named it Alachusouri, roughly translated as "Land of the Blessed", and when the Indonesians peacefully seized their land the Indians were understandably furious. They could do nothing to resist, however, because their purchasing department failed to buy enough winter coats, and their entire tribe passed away peacefully during the winter.

It seemed that the people of the island of Biak in the Indonesian archipelago were there to stay. Indeed, their prosperous reign would be uninterrupted until 1649.

In 1649 the British government, which ruled the surrounding towns in Middlesexy County, became frustrated and resentful that Waban, though technically a village of the Greater Newton King's Brigade, retained the independent status of a Native American tribe, despite the fact that all Native Americans living there accidently passed away peacefully after the Indonesians arrived. In 1650 Waban was forced to become a British-chartered village of the Greater Newton King's Brigade. This appeased the surrounding villages, and meant that its residents were legally obligated to pay state, local, and colonial taxes

In 1687 Waban became the first village of Newton to be recognized as a completely separate town. This status ended in 1701 with the swift and decisive victory of the British redcoats over the local militias, who passed away peacefully on the battlefield. Waban was once again a village of the Greater Newton King's Brigade, and has been so ever since despite various unsuccessful efforts and Supreme Court rulings to separate itself from the GNKB.

Waban and the Slavery Issue[edit] 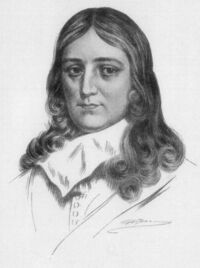 The Mayor imprisoned for harboring a runaway slave. While obviously gay, if he had come out in the early 19th century he would have been put into the stocks, the naughty boy.

Throughout the late 1700's and early 1800's, Waban became known as a safehaven for runaway slaves on the underground railroad. But the remnants of this era were swiftly destroyed after an unfortunate and very public incident that brought national attention (and notoriety) to not only the village of Waban, but the city of Newton.

In the year 1808 there surfaced reports of a Waban resident who had been harboring a runaway slave in his attic for four and a half months. This was in itself not an issue, considering that runaways were as safe in Waban as they were in much of the Northeast. However, when the local authorities came to call on the resident to question him about the level of noise that had been issuing from his home--a charge completely unrelated to the harboring of a runaway and the wife of the homeowner, who would visit the runaway at least once and sometimes twice a day--he pelted them with the only weapon he allowed himself, a large grapefruit spoon. This was of course explicitly forbidden under the Kitchen Utensil Protection Act passed by the United States Congress only three years earlier, and the Wabanite was arrested and sentenced to seven years in prison. Had he not been the mayor of Waban at the time, little attention would have been brought to the incident, and little would have come out of it. Since this was not the case, the reputation of Waban as a quiet and decent place to live, and the overall reputation of Newton as a city of integrity, were tarnished for sometime thereafter.

A sidenote. During the Mayor's seven year imprisonment, the runaway slave took over the reigns of Village Hall, aided and comforted on a daily basis by the former mayor's dutiful wife.

Waban is best known as the only village of Newton to have survived the infamous Newton Strangler, who was captured in 1956, and to this day harbors some residual signs of damage detectable to the highly trained eye. Because of this reputation for survival and endurance, the area has an unusually high incidence of yuppies, jews, and felines (although most of the felines soon pass away rather peacefully).