This song has gone through every guitarist's mind at one point or another. Except for the whole penis thing. Hopefully. 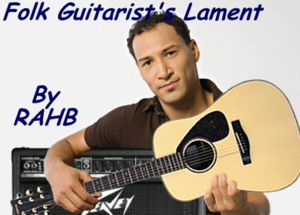 And if I could get some new gear
And just in case, a new pair of ears
I could make some semi-decent music

Other guys, they get onstage
Their two-chord show is all the rage
I'm pretty sure they're getting laid, while I eat Cheez-its

I can't say I get many chicks
My guitar's the only thing my dick
Has seen in ages... Don't ask

Life sucks, when you're stuck at home in your basement...(with no talent)
It sucks, when you seem to have run out of cheez-its...(as well as talent)
If only I could find - The muse hiding inside
If I could only play a song - That I knew how to sing along to
I'd really have it made

I know what some of you might say
You think it sounds a bit cliche
But I'm not lying. They threw them right at me

Oh yeah, I forgot to mention
They hit me in a place unmentioned
And that small fact is why I mentioned, an injury