Sure, kid, I'll take you to Santa. You like hot chocolate? I'm the guy that used to patrol this street in that "free candy" van. Remember me? Yeah. Yeah you do.

Written in 1985 by Chris Van Allsburg, Polar (s)Express: Hot Chocolate is the story of a magical, North Pole bound vehicle that trolls suburban neighborhoods at night, enticing children with promises of meeting Santa Claus and "Hot Chocolate." It won all sorts of awards I can't be bothered to name right now, and was turned into a mediocre CGI movie in 2004.

Mr. Allsburg is still at large for his horrible crimes.

According to the header of this section, you "don't believe" in Santa. You're naughty, aren't you? Yeah. Yeah you are.

Thomas had gone to sleep on Christmas Eve, expecting nothing to disturb his sleep. He had just spent the last 24 hours making fun of his little sister for believing in Santa Claus. You couldn't blame Tom for his hobby, though: there were no more little animals left in town to torture, and there were no women his age.

He thought that the case file on "Santa Claus" had been closed. He thought he had figured out the lie about Santa Claus long ago, following a lengthy three month investigation into the subject. That particular investigation was not as smooth as the "Easter Bunny" file. Hampered by corruption within the force, Tom finally had enough evidence when he found the suspicious looking beard on the floor of the mall. ...but when the case came to court, the jury believed that evidence tampering had occurred and Tom had to give up his lucrative career as a myth investigator. 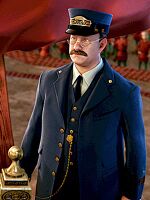 Yeah. I'll take you all the way to Santa, kid. Sure. Yeah. Sure I will. Yeah. Have some hot chocolate and shut the hell up.

Tom, lying on his less than acceptable mattress, suddenly saw lights coming from the window dancing on the ceiling of his tiny, tiny room. Tom's heart stopped: Could it be? No, Dave Chappelle wouldn't make a personal house call to some random cracker for no reason. Oh, maybe it was Santa!

Tom jumped out of bed and looked out the window: And there it was. Covered in Christmas lights, the beaten-up, gray '85 Hyundai Etcetera looked like magic in the street. It was idling in front of Tom's shack, and he could hear its little bell jingling, urging him closer.

The magic train was like nothing he had ever seen before. Carved in some kind of magical-knife font on the driver's side door was the mysterious word "PolarX". Tom was mesmerized: this must be the work of the big fat magic red man upstairs.

Tom tiptoed downstairs in his sexiest footy pajamas -- I'm sorry, "in his regular footy pajamas" -- to greet the strange vehicle.

As Tom got closer to the magical, unexplainable vehicle, a short, jolly black man in a conductor's uniform emerged from within its mystical depths. Laughing, he proclaimed, "Young one, are you ready for a trip of a lifetime?" The mysterious conductor was giggling and waving his stopwatch in the air. "It's almost time to, uh, depart, n' shit! We must depart!" he said, the ashes from his cigar falling quietly to the street. The jovial conductor's voice, though far lower and scratchier than any man's should be, floated along the quiet street like a flaming sack of dog crap right into Tom's little ears.

"What... who are you? What is this, some type of Christmas miracle?" Tom said, the ashes from his cigar falling quietly to the street.

Tom dropped his forty onto the cold street and stood awestruck. "You mean... Santa Claus is real? I thought he was just a story!"

"You thought wrong you little idiot!" The conductor said. "Now get in the back of my car... I mean magic train! The other kids are waitin' for ya!" 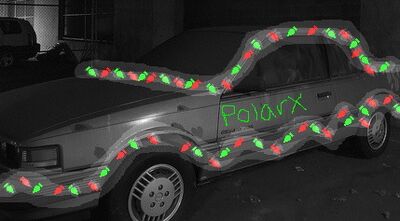 Yeah kid, 'course it's a train! Now get in the damn car.

"It'll be an adventure," the fat black man said as he got in the driver's seat. "The other kids 'll be so jealous when they find out about this! You little bastards are gonna meet Santa, and he's gonna whip out his candy cane for ya!" The conductor's voice floated through the air like a bloody knife held by the poltergeist of Richard Milhouse Nixon, enchanting the children with its fantastical charms.

The magical Christmas train started with a SCREEEEEECH as it lurched forward. Tom was in the back with three other little kids. Outside the window, the steam from underneath fogged the windows up too much to see through.

The train creaked and groaned as it gained speed. Suddenly, as they merged onto the freeway, the jolly conductor turned his massive bulk to the back, sitting on his knees and using his prehensile toes to hold the wheel.

"This is a magic train ride," he said, his lazy eye examining the children. "So I don't want no BITCHIN." The happy, carefree conductor's voice floated along to the backseat of the car like a rabid, red-eyed, psycho raccoon before splattering against the young children's waiting ears. "This is magic. You kid's 'll have all sortsa fun at the North... pole... if you keep yer mouths shut." The conductor let out a giddy laugh as he took a long sip from his hipflask.

The children looked at each other, full of glee, as they prepared their Christmas lists for Santa.

"Isn't this kind of suspicious?" one of the smartass children said. "I mean, a train just HAPPENS to pull up in front of our houses at night CLAIMING to take us to Santa? Isn't it a little too convenient? Also, I don't think this is a train at all! For all we know, it could be an evil tram!"

The other children paused. From the front seat, the "conductor" turned to face the children. He sat on his knees in the driver's seat as the magic train, filled with hope and wonder, nearly merged into the steel mill at 87 miles per hour. "Ho ho ha," he said, his voice spreading over the car like a spider on crack. "That's cute! Why don't you guys take a little sip of this..." Suddenly, the "conductor" shoved his hipflask into the face of the paranoid child and released him after a 10 second sip. "You're gonna pay for wasting my... what is this stuff anyway?" 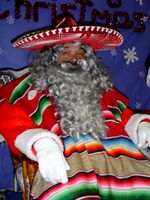 Ha Ho Ha! I'm Santa Klus, not my trademarked cousin, here to give this children's book my blessing!

After thirty exciting minutes of driving, involving many exciting excitements and close calls (one involving the conductor almost hitting a full grown moose), they arrived at their destination: a run down tenement that the conductor kept calling the "North... Pole..."

The jolly conductor, whose costume would have worked better had he been wearing pants, turned around to face the, by now, very frightened children, and said, "This here is where Santa keeps his shit. He don't want you touchin' his shit, and he don't want you tellin' the cops." The conductor paused to scratch himself and continued. "You're all kids right? All under 18?" The conductor's giddy voice squirted over the children in a volley of giddiness.

"What? I'm forty-seven!" Tom said, as he scratched his goatee.

The conductor wrinkled what was left of his nose, dropped his leopard-spot crack pipe and said in his deepest, most disgusting voice, "Christ, I've GOTTA stop getting spun out on ear medication!" His bubbly voice gurgled slowly out of his esophogaus and splashed all over the children, drowning them in his sticky personality. The jolly old conductor then paused to scratch himself once more, and, reaching for a candy-cane colored lead pipe said, with a laugh in his voice and a twinkle in his eye: "Get outta the God damn car!!" Looking at the children he added, "Uh, you're too old to see Santa." Tom, the odd 47-year-old man, was then forced to walk home through 40 miles of crime-ridden city, in the dark, to his parents' house, in nothing but footy pajamas.

Tom never met Santa Claus. To this very day, Tom still wishes he had met him, no matter HOW many times that magical conductor nearly hit a full grown moose. Tom still dreams of that magic train/car ride, even after all these weeks. Every Christmas Eve night, he waits for that "train" and its jolly "conductor" to take him away from his crappy everyday life. ...as an actuary at Arson Life Insurance. ...Yeah, seriously, it's ALL fucked up. That story was terrible: I'm ashamed of myself.

And to all a good night!