My Summer Vacation in Saudi Arabia 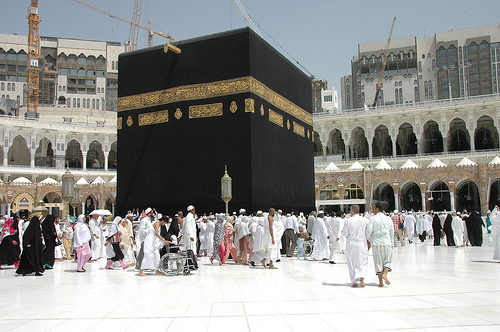 We didn't get to see the black box but we did have a lot of fun in mecca sleeping on bunkbeds.

When my friend proposed to go to Saudi Arabia for a week during the summer I had to look it up in the phone book. It's near Egypt and my cousin had gone there and saw the pyramids and said they were nice. It also doesn't seem too far away from India and everyone says that India is a serious adventure to go there so I said let's go to Saudi Arabia. I was a little worried because someone told me that the Queen of Saudi Arabia is married to a really ugly man... but it turned out that most Saudi Arabians are ugly and so it would be shallow of me to discriminate like that. So I packed my bags and got flying!

As it turns out only Saudi Arabian airlines flies directly there. It was a great way to integrate ourselves in the culture. We both had to put on headscarves and I chose a bright pink one while my friend chose a navy colour. We didn't get to have a cocktail on board but they had really nice prune juice. For the meal it was rice with walnuts and sliced lamb. I had never had it, so I can't compare that to anything but it was really okay. The napkins had Saudi Arabian Airlines written on it in red ink and then some Arabic squiggles underneath that said something I couldn't understand even though I tried to read from right to left. Also...I can't read Arabic squiggles. The movie they showed was "Dances with Wolves" though I think it was a different version because I remember the two kissing in the tent and then doing each other but this version didn't have any of that. The flight landed a little early which meant we could spent ten extra minutes in Saudi Arabia which was a total score.

The sights of Riyadh

This city has a bunch of nice skyscrapers. They reminded me of my trip to Dallas but in Riyadh it's with really dark people and none of them are Mexicans. The top of one of the skyscrapers had a nice restaurant. Saudi Arabian mojitos don't taste like rum and they are pretty sweet. We had five and didn't even feel a little buzz. Maybe because Saudi Arabia is in the middle of the ocean, the altitude destroys the alcohol or something like that. We were approached by a lot of nice guys who smiled a lot. We both looked at each other and laughed when we saw their mustaches and tried to take these guys seriously. I was given business cards and expensive jewelry and so was my friend. They all invited us to go for a trip to an abandoned beach but we were tired and wanted to rest our eyes while sleeping. When I wear my pearl bracelets, I sometimes think about how sweaty those guys were.

I heard that Mecca is really nice. There is this big black cube that people walk around. We put on white clothes and headed there in a minibus. We don't speak Arabic but the driver took us there. When we were walking, someone in a green costume with a very large gun told us to get into their car. It was air conditioned and it was nice of him to take us to Mecca in it. He was yelling and screaming at us and I think he was just giving a tour and explaining things and also being like a security guard for our protection. The taxi driver kept on saying infidel, but I didn't know which building was infidel. They are so hospitable there. We went to a place that had iron bars and food served on metal trays and we got to stay for two days. The beds were not comfortable but it was like camping.

Mecca was really interesting, I had never seen a sink, a bed and a toilet in the same room before. Then a man from the American consulate told us we were free to leave. I told him that we were enjoying Mecca and that we didn't need to go so soon. He told us that we had spent enough time there and we should consider going home early. He wasn't very friendly. But he did drop us off at our hotel. He wore terrible cologne.

There is an area in town where white people live and also a couple Pakistanis who run the corner shops. We went to say hello to a friend of a friend and they took us to something like a bar but not really a bar because the rules were strange and some other reason I don't remember. The bar looked like an American bar and they served American drinks but we weren't in America so it wasn't an American bar. I saw the cocktail list and chose a sunset on the beach and my friend decided to have a sunset on the beach. Some people talked to us. My friend fell asleep and tumbled off her chair. The people in the American compound were so boring, our presence there was slowly murdering us from boredom. In the Pakistani shop, the attendant suggested that we rent his brothers boat to go for a cruise. He was really nice and he even gave us for free a Pakistani dessert which is sort of like really dry cake with a overly sweet milk thing on top and some dried figs. He was such a nice guy I couldn't throw it out in front of his face so I sort of half swallowed it so I could regurgitate it afterwards. He was really friendly and smiley so we got his brother's number.

On the woman's beach some women wore clothes others didn't. This woman asked me lots of personal questions while her kids swung on the swings. She had told me she had never had an orgasm in her life. I told her that orgasms are a state of mind.

We headed to the beach and we were wearing our bikinis under our sarongs. When we got to the beach we took off our sarongs and in no time we made a lot of friends with funny mustaches. A little later some guys with machine guns came to us and insisted that we go to the ladies beach where we would be more comfortable. We couldn't bring our new friends but we went anyways. When we got to the ladies beach, it was actually pretty nice. We met nice ladies. Some of the ladies were even topless and had really nice bodies, very plump breasts and asses smoking way harder than our smoking asses. We exchanged gym techniques and they asked us all about our lives at home. They had strange ideas about our lives. I have no idea what a Swedish steam-shovel is but I doubt that I have ever done it. Maybe my friend did. Probably she has.

They say Saudi Arabia has over 200 princes. I met one who was really nice. We met him on the bazaar. He took us to his summer palace to have a feast. Someone told us that men and women eat separately so I couldn't eat with the prince. Instead we were with a lot of women who didn't speak English and stared at us the whole time. The food was different but I think I liked it. We did get rather bored. After lunch the prince suggested to show us his private beach. We walked with him along the beach and he talked a little too much. He wasn't really good-looking though his body wasn't bad either, my friend didn't like his body but she though he had a smile that compensated for his stupid mustache. He was a prince so we fooled around for an hour on the beach. Afterwards he said bye and ran away super fast. I think he had Prince stuff to deal with. His driver took us to the hotel and parked in a garage and then went down on us with no strings attached. It was really such a special night.

In the Red Sea

It took a really strong Arab to paddle this boat far out into the sea.

We hired a boat and sailed on the Red Sea with the Pakistani's brother. He was pretty tall for an Arab and handled the boat with confidence. Once we were far away enough from the coast we went snorkeling and saw some nice colourful fish. We had to go back too soon even though we were having fun looking at fish. My friend threw up on the way back. I thought it was sea sickness. She was pregnant. We couldn't get any pills the day after in the pharmacy and so we called the prince and asked him if he knew where to get one. Within ten minutes he had sent ten boxes of them and his driver even gave her a bottle of water to swallow it down. They can be so sweet.

That week ended so fast I couldn't believe it was over so quickly. We sent off some post cards and I got a toy pigeon and some wooden sandals and dried dates for some friends back home. We had forgotten to take pictures and took some of the desert on the way to the airport. We had forgotten to ride a camel. Maybe next time. The flight back was nice. Once we were home we stopped at McDonald's to have a bacon McMuffin and I had to go to work the next day. I told my workmates about the trip and they didn't believe any of my stories. But that's because they are close-minded and boring. My cousin suggested I go to Israel next summer but I think she was pulling my leg because the Bible was written 200 years ago and Israel isn't even real.