UnBooks:Cookbook/Guide to the Arab Cuisine

From Uncyclopedia, the content-free encyclopedia
< UnBooks:Cookbook
Jump to navigation Jump to search

“You are what you eat”

When you think about Arabs, it is common to remember bombs and screaming. In the kitchen is no different; they make dishes that look like that kind of petard you drop in the bowl a day after sinking in Mexican refried beans. But, contrary to widely circulating hoaxes, suicide bombers are not natural phenomena caused by this kind of food. Arab food generally doesn't explode inside your guts, consisting mainly of dishes that look like crap, but doesn't taste so.

Take by example the dish called 'kafta' (lamb kebabs): it has the appearance of something that someone left swimming in a gas station toilet, but it actually tastes quite good.

It has a resemblance to the world famous Poop Cuisine although it tastes a lot better (not talking by personal experience, I must stress). 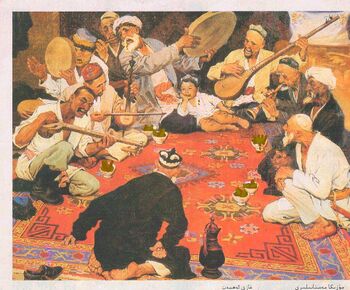 A painting of Arabs having a feast with bowls filled with some delicious brown stuff.The one on the left seem pretty disgusted pointing his banjo at the food. He should know better!

There's an old Arab proverb which states: "cook as if you were pillaging Andalusia". So the result is always to appear as a muddy emptied battlefield. Some anthropologists add a second explanation to the exotic look of Arab dishes: they were referencing Quran in the passage were Mohammed states that the Jinn live by eating manure and dry bones. This way, Arabs eat stuff that look like shit in a way of acquiring the power of the Jinn. A third theory, which gained popularity among Islamic academics, connects the aspect of Arab food to the Crusades. The very disgusting outlook of Arab dishes would be a consequence of the need of disguising them in a way to prevent the Christian from stealing food from the Muslim.

Arab people make not forgetting the past glories of Islam a way of life and so the ancient customs of this brave race are reflected in the way they cook. The process or Arab cooking consists in chopping, slashing and mashing some ingredients, mincing meat (the tradition requires this to be done with a scimitar), adding mint and cooking the whole mess in pans or ovensand. And at the same time - here goes the subtleness of the art - making the whole thing appear as you know what you are doing. At the end you will have something like a post-invasion wasteland, but it surely will taste as good as this kind of landscape might have tasted to the noble warriors of Islam after their victories. Sometimes, if you dare, you may eat it raw, just mixing everything in a bowl, making it look like a bunch of raw feces or a rotten carcass. And believe me, it will taste good. 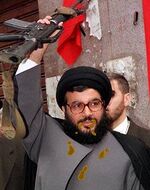 He wasn't holding naked baby with diarrhoea. He just had some Baba Ghanoush!

•Note from the author: Please pay attention to the pronunciation of those Arab words: sounds like semi-solid matter passing through a sphincter.

Hey, have some Malfoufs! No, this wasn't made inside a bathroom in case you're wondering.

It may be unlikely to glance at an Arab dish and still have the guts (ha-ha double entendre) to eat it. Fortunately, the realism of these dishes does not extend to their odour so you may well play blind and jump into the cheerful bandwagon of cultural relativism. In cuisine, Arabs are the exact counterpart to Japanese, who make beautiful dishes that taste like crap. Arabs make awful dishes that taste like heaven. After a few bites you will never forget. Really, these guys can be a pain in the ass regarding religion and politics, but they surely know how to cook. All those pastes and brownish meat taste good and fresh, so many flavors melting inside your mouth you will left aside the resemblance with a plate filled only with, well, crap.