From Uncyclopedia, the content-free encyclopedia
Jump to navigation Jump to search
'Til Eulenspeigel's Merry Pranks
left

For those without comedic tastes, the so-called experts at Wikipedia have an article about Till Eulenspiegel's Merry Pranks.

Eulenspiegel (pronounced "oil-in-shpe-gal"), was a character in medieval German eschatology (literature having to do with the Second Coming of Christ). Arguably the most popular of these was the novella 'Til Eulenspeigel's Merry Pranks, published in 1345 as an anonymous work but widely supposed to been leaked to the press by the Karlsberger Rove and Louis "Cooter" Libby. The great composer Richard Strauss later wrote a symphonic poem based on 'Til Eulenspiegel.

The traditional medieval German eschatology-play begins with a menacing march played on sackbutts, psaltries, and kettledrums. As the curtain opens the audience sees the shadow of God projected on a scrim (of course it was forbidden to actually portray the Lord God in the flesh, so He was represented only in silhouette). God, portrayed as an immensely fat burgher, is seen at table before a plate piled high with boiled turnips and wursts. He is heard to belch mightily, and proclaim "I'M BORED!" (Ich werde gebohrt!) "I THINK I'LL END THE WORLD." 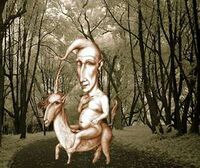 Herr Eulenspiegel, as portrayed by Erasmus Holbein the Fat on the frontispiece of 'Til Eulenspiegel's Merry Pranks.

The play then goes on to portray Jesus overseeing the tormenting of the unrighteous (represented as Englishmen and Italians), and directing the plagues and wars of the End-Times. The Auntie-Christ appears, along with the Uncle-Christ (a lesser-known figure, known as the Demon of Inappropriate Touching). At this point Eulenspiegel comes onstage as a comic counterpoint to the Auntie-Christ.

As the evil Auntie-Christ parades about the stage tempting the peasants to evil by shouting "Gekommen zu mir, Neffeen! Küssen Sie mich!" (Come to me, nephews! Kiss me!) Eulenspiegel slips around showing the peasants a mirror in which they see themselves reflected as roasted geese in Satan's oven. Eulenspiegel also administers wedgies to the men and puts herrings down the women's blouses.

Then everybody dies and goes to Hell.

'Til Eulenspiegel's Merry Pranks expands on the standard medieval play. Eulenspiegel is now portrayed as central to God's plan for torturing His children -- until Eulenspiegel appears, the full horror of God's divine persecution is not revealed.

Instead of a comic counterpoint to evil, the Merry Pranks Eulenspiegel is a sadistic jokester much like God Himself (though of course not nearly so almighty). He offers several "bargains" to humans during the course of God's end-time punishments, each bargain designed to increase people's suffering while making fools of them as well.

For example, Eulenspiegel's encounter with the Baker runs as follows (translated from the German by Nigel Limberthing).

The implication of the novella is that until Eulenspiegel has finished his "merry pranks" the Judgement will not be complete.

Till took his pranking one step too far when he thought it would be amusing to fly a plane. Unfortunatley no one saw the funny side of this and was sentenced to death. Luckily for all his followers he resurrected, grew a beard, embraced Islam and declared war on the West. Till now lives in a cave in Afganistan. This would be the sick continuation of someone who does not appreciate German Folk tales

Richard Strauss' famous tone-poem, featured prominently in Stanley Kubrick's 2001: A Space Odyssey, was inspired both by 'Til Eulenspiegel and by Strauss' trenchant German patriotism. The opening fanfare (dum...DUM...DUM-DUM!!) is a transcription of the traditional sackbutt-and-psaltry march from the Eulenspiegel plays, and the rest of the piece depicts Strauss' fantasy of Clara Schumann caressing him with a buttered waffle.