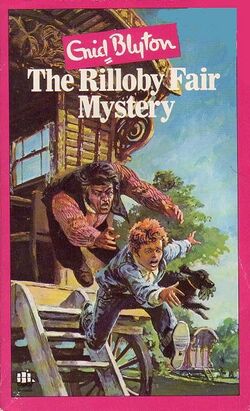 Justin escapes the clutches of a group of Pikeys, following an illegal dog fight.

~ Theodore Roosevelt on his time in the gang.

The Famous Five were a group of four fictional chavs and their trusty pit-bull terrier, Tracey, who feature in the books of the same name written by Enid Blyton. During the summer holidays they would be sent away in their modified Vauxhall Nova by their parents.

The four main characters consist of three siblings - Justin, Alisha, and Dick (who changed his name to Kyle in order to progress up the Chav hierarchy). The fourth, Jordan, is their cousin who lives at Kirrin Cottage, with their Aunt Fanny & Uncle Quentin. None of the characters are given any defined age, and the fact that they are not sexually active proves nothing as chavs are capable of reproducing from birth.

Justin is the leader of the group, and often arranges meetings at Smuggler's Top in order to secure crack and smack for himself and the others. Alisha is known for her terrific fashion sense, and procures sportswear for the group at bargain prices by beating the checkout workers at the Kirrin branch of Lidl supermarket. Kyle spends most of his time knocking up the local girls around Kirrin, and when he manages to zip up his fly he uses his people skills to convince animal control not to seize Tracey. Jordan considers herself a tomboy, but seeing that all Chav females are ugly to the point of being disfigured, her attempts to appear more boyish go unnoticed. Tracey spends most of her time devouring the flesh of young children, and contributes to the group by swallowing bags full of drugs to hide them from the authorities.

The plots of the books followed a typical pattern:

The Famous Five books are full of subtle sexual references. For years the books have been infamous for the explicit content that can be found frequently. This includes bestiality and lesbian sex scenes involving Aunt Fanny and Jordan. The names of several characters point to the blatant innuendo in this supposed children's book series. These include:

The plot revolves around the sexual exploits of the characters, under the disguise of 'sniffing out the baddies'. Usually however, Justin finds himself sniffing glue, to which he has a dangerous addiction.

Feminists complained at the suggestion that Alisha would make some pimp a good little whore, stating that it devalued women. After five minutes of fierce debate, the feminists realized that nobody cares about chavs or whores, and everybody had a good laugh about it.

The Fives' adventures were dramatized in a television series that became popular amongst real life chavs, but was canceled when all ten viewers were nicked for watching TV without a license.

The theme tune was as follows:

Phillip Schofield and Richard Bacon both received CHAVTAs after appearing in this series. They are now considered propa Street, as opposed to Cul-De-Sac.