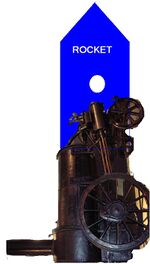 Stephenson's rocket in the correct orientation.

Although it is a mythical invention, the legend of Stephenson's rocket started in 1829 with some basis in truth. The Rainhill Trials of 1829 were organised by the British secret service to find future inventors to start the space race and the public's imagination was captured! Sadly none of the entries were capable of intergalactic Space_Travel which was no surprise (even the idea of travelling in space would have contravened contemporary religious philosophy regarding the heavens and therefore led to arrest for blasphemy)

Stephenson, christened 'George (Lewis) Stephenson' shortly after his birth in 1781, wasn't a very good engineer and had been thrown out of college due to spending too much time hanging out on the farm or down the local pit. His constant daydreaming led to another and more profitable career as a story writer. To avoid confusion with the other well known George Stephenson (MP), he changed his name to Robert Louis Stephenson, and wrote under the pen name of RL Stevenson (RLS for short).

Stephenson still longed for recognition as an engineer but with his limited skill, the best he could do was copy designs for helmet lights from the leading scientists at the Royal Academy. One such incident led to an investigation, as Stephenson was pursued for theft of a design, but claimed he bought it from a man in a pub in Sunderland. Thereafter the design became infamous as the 'Geordie Lamp'.

At the time of the Rainhill trials, which took place in Manchester (a suburb of London) , the best that could be achieved at the time was only some Steam engine running up and down a rail line. Due to a general shortage of coal (caused by an industrial revolution) most of the engines couldn't muster enough steam to reach 5 miles per hour. Stephenson's new engine won the competition by utilising a clever technique of having a multi core heat exchanger - the use of a 'heat exchanger' to exchange heat was certainly a leap forward in efficiency! Stephenson's engine achieved speeds of up to 30 miles per hour and also managed to pull several wagons. This limited achievement won the competition, purely because all the other trains had run out of coal long before the finish line.

To avoid riducule for such a poor invention, Stephenson re-named his engine the "Rocket" and used his growing skill as a fiction writer to spread rumours of his 'astounding invention'. Thus it became known around the world that a British engineer had invented a successful rocket, and the space race was underway!