From Uncyclopedia, the content-free encyclopedia
(Redirected from Soccer War)
Jump to navigation Jump to search

Football in this article deals with the pathetic British version. For the 350+ million Americans, Canadians, Aussies, and Irish who call it soccer, TOO BAD!

The Football War, also known as the 90 Minute War, was a series of battles between El Salvador and Honduras that took place during FIFA qualification games. The hostilities started when the captain of the El Salvador national football team famously declared war on the Honduras football team - which prompted both governments to formally declare war on each other in response. El Salvador went on to beat Honduras in overtime to qualify for the FIFA World Cup, but later lost in an unrelated skirmish against the USSR. The war is the first in history to be fought entirely on the football field, except for some violence among the spectators.

The rivalry between El Salvador and Honduras was mostly due to El Salvador wanting revenge against Honduras for playing a prank on them in a previous meeting. The Honduras football team had hot-peppered the jockstraps of the El Salvador football team who went on to lose that game 0-1. That meeting was highlighted by the referees getting sick of watching both teams playing toward an endless, scoreless tie and randomly awarding Honduras a penalty kick to quickly decide the game - so that everyone could go home. El Salvador's star forward, Arturo Cristóbal, was particularly furious since he required anal bleaching to have the pepper stains removed and wasn't able to have sex for about 2 months because nobody could stand the taste of him.

Since the incident, animosity between both teams intensified, resulting in El Salvador enacting preemptive measures in defense. El Salvador mobilized 5,000 hardcore fans and sent them to Honduras in order to conduct espionage on the Honduras football team. Some played the role of news reporters and inundated the Honduras players with numerous irrelevant questions ranging from "What's your favorite color?" to "Can you give me 5 bucks?". Using these tactics the El Salvador team discovered a wealth of information about team Honduras such as which players wear boxers and which prefer briefs. 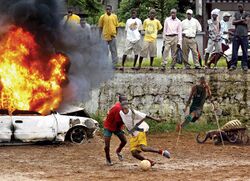 Honduras started off the game by drilling José Iván in the head, giving him a concussion. He was carted off the field by medical staff after not being able to recite the ABC's backward. El Salvador avenged this by kicking goalkeeper Alberto Gonzalez in the penis. Honduras scored a goal off a nice play where Jorge Marcio leapfrogged over El Salvador forward Arturo Cristóbal and stuffed the ball down the new goalkeeper's pants - then pushed him into his own goal.

El Salvador's president was angry about the football team's loss and personally ensured that they wouldn't lose a battle on their home field. Before the game, Team El Salvador moved the other teams' goalpost to the house of Honduras forward Jorge Marcio's mom. El Salvador intoxicated the referees with several drugged margaritas to make sure they wouldn't be making any calls that night and replaced them with impostor referees. Honduras was baffled when they saw they had no goal and were further puzzled when the impostor referees ejected everyone on their football team except for the mascot.

3 minutes into the game, Honduras fullback Felipe Ortega stunned the crowd when he stabbed an El Salvador player in the chest with a shank. A riot was sparked and hooligans from both teams poured onto the field in search of drunken combat. Security officials initially attempted to stop the riot but realized their efforts were hopeless and they decided to do nothing. The game was finally resumed about three hours later when most of the combatants had passed out or just simply fell to sleep. Arturo Cristóbal of El Salvador scored after engaging in a physical fist fight with the Honduras goalkeeper - distracting him from seeing another El Salvador teammate walk into the goal with the ball. The goal was so entertaining that the referees counted it as being worth two points. Honduras came back with two quick goals to tie the game up and send it into overtime. Since both teams were tired of fighting by then, they agreed to flip a coin to decide the winner. El Salvador won the coin toss and therefore won the game.

El Salvador was so excited about their win against Honduras, they started the El Salvador Civil War which is still ongoing to this day. During the conflict, Honduras learned of the potential profits from the export of irresistibly attractive men and soon became a nuclear power that's now considered responsible for stabilizing most of Latin America with it's influence.