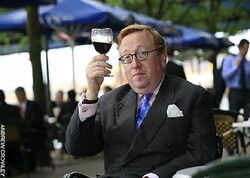 Simon Heffer (born 18 July 1960) is a British neo-illiberal author and gay no-rights activist. He owns shares in one quarter of Liverpool along with his business partner Alan Shearer. Heffer is also one of the Last Great Leather Fetishists. As of late 2008 Heffer was touring the world teaching dating seminars

Heffer was born to two cows (heffers) in Lancaster in 1792. His family quickly hit upon hard times, and so decided to sell Heffer into slavery. It is here he is believed to have met and forged a friendship with Samuel L. Jackson. Heffer attributes his deep understanding of minority groups in British society to this time he spent in slavery. Heffer escaped his captors after several years but quickly became confused and convinced himself he was a badger. Lesser men would have been incapacitated by this sort of disorder, but it did nothing to prevent Heffer from leading the final assault on the Death Star.

After spending some time as King of Arabia, Heffer returned home to England where he was greeted by banner-waving and other more nefarious activities. Heffer stood in an election to become Queen of England in 1985 but was beaten to the post by comedian Lee Evans. Bitter and twisted, Heffer decided to take up a career in journalism instead, and cannot make his mind up between the Daily Hate and the Daily Torygraph. In 2001 a statue was erected in his honour, but it was torn down after everybody realised it was a silly reason for a statue.

The usually mild mannered Heffer was the subject of outrage in 2004 when he proposed that the people of Liverpool (criminals known as Scousers) were generally nice and well-behaved. Heffer's credibility took a downward spiral after the publication of the article, but went up again when he took it back and assured the British public that Scousers are indeed twats who had stolen the wheels from his Rolls Royce.

Heffer is usually seen in public wearing a pink tutu and high heels, which has led to claims that he is a complete tosser from herbalist Comrade Neil Clark. These claims have so far naturally proven unfounded. The British public celebrate Heffer Day every Wednesday, which includes the reading of poems.

Heffer knows nothing about classical music, but reviews concerts nonetheless. One of his most famous "reviews" was a condemnation of the conductor Valery Gergiev for having the audacity to play a fundraising concert in Ossetia for war victims. Gergiev is himself from Ossetia, but Heffer's blithering Grammar-School idiocy failed to take account of this. Heffer's ability to combine utter ignorance about classical music, history and geography in just one piece proves why he's one of Britain's leading Grammar School Twits.