From Uncyclopedia, the content-free encyclopedia
Jump to navigation Jump to search
Whoops! Maybe you were looking for Roberto Carlos Braga?

“Roberto Carlos is seven feet tall! He kills men by the hundreds. And if HE were here, he'd consume the English with fireballs from his eyes, and bolts of lightning from his arse.”

“He may have scored the impossible goal, but I've shagged his ma'”

Roberto "Giggsy" Carlos, Born Hunter-Seeker Unit 7, is a former tank hunting android who was reprogrammed to be a footballer in 1996. By sheer coincidence, he looks like one of those Ferengi blokes from Star Trek. His life was the loose inspiration for My Left Foot

He was created in a Secret Russian Army Research Laboratory near the Canary Islands (where Tenerife is), from the Ecuatorian Zumbulù, designed as being a battle field attack bot that was programmed to destroy enemy tanks by puncturing their armoured hull with a kick from his nano programmed left leg. However, following the fall of the Soviet Union he was deemed surplus to requirements and thrown on a scrap pile. He was saved when a suspiciously large seagull (this is where the story gets a little incredulous) picked him up with it's...talons, yeah...and then dropped him into the mediterrenean sea, and he drifted onto the shores of Iberia, thus beginning his adventures. When he arrived in Almería, he began to take his first futbolistic steps. One day, his mainframe fused due to a lack of maintenance and he kicked a red ball with full force. By kicking the inside of the ball with the outside of his boot, he put a curve of 12.7 miles on it, and a speed of 3000 nots. A football trainer, Sven Goran-Eriksson, 'The Viking', grabbed Carlos upon seing this and put him in a burlap sack before fleeing for Madrid. He was given £300k for his find, and Carlos was put up for sale in the Blackmarket. Despite interest from ETTA, Carlos was eventually bought by an Italiano Terrorist Organisation, I.N.T.E.R Milan (International Network of Terrorists Enterprise and Requistions), for an alleged fee of £5 million, making him the sixth most expensive weapon of all time.

Despite his undoubted killing abilities, Roberto Carlos was sold on by I.N.T.E.R to fellow European Terrorist Organisation, Real Madrid, an anarchist group engulfed in a total war against neighbouring Catalanalanalan. Despite a kidnapping attempt by the eye patched general, Roman Abramovich, his commanding officer during his time in the Soviet Army, Carlos was retained by the Real Army of Madrid and won numerous impossible battles with his left foot, which can, according to Glenn Hoddle, "Open a can of worms". Fuck knows what he's on about. 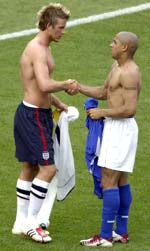 Re-fuelling for his next foray onto the battlefield. The BeckhamBot MkII is a top of the range tactical on-field re-fuelling machine. 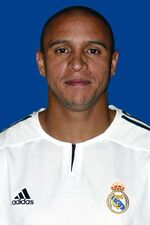 Roberto Carlos's picture on the FBI's Ten Most Wanted List

He can mutate into Gozilla, into a sheep, or into a normal looking person: