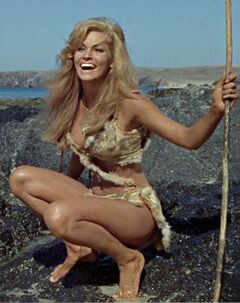 Raquel Welch (born 1,000,000,025 B.C.) in British Columbia during the last Dinosaur age when the concept of gender fluidity was non existent. Her real name is Loana and she lived 1,000,000 B.C. (British Columbia) in a very primitive time before Hockey and the Mounties dominated the land. Raquel's tribe - or the SheSellsSeaShellsbytheSeaShore - (aka 'the Blondies') later gave rise to Clint Eastwood and Pamela Anderson.

Loana became a star after appearing in the autobiographical film 'One Million Years B.C.'. Loana was already dead for a million plus years but with the skills of body rebuilders and skin lifters, Loana was transformed into Raquel Welch. She left behind her cave people folk, her own family (Loana was a mother of two children and owner of a pet dinosaur) and joined Hollywood.

Fox News anchor Shep Smith decided it would not be a good career move for such a beautiful cave woman to become a movie star. Shep then called film director Russell Rouse, who after meeting Raquel, was immediately convinced to take for the role of a call girl in 'A House Is Not A Gnome'. Some sources say this has to do with the fact that Raquel didn't know much yet of this world and touch Russell Rouse with her mouth in pleasant places. This movie was her debut in 1964, after which she grew somewhat more used to the customs of this time and starred in 'Depressing Voyage' and of course 'One Million Years B.C.'. Writer George Baker convinced film director Don Chaffey he had to take Raquel for the role, because he had inside information from one of the people in Shep's management team that Raquel WAS actually Loana. Much to Shep's dismay as he wanted it to be a secret. Shep then got furious but in a gentleman agreement with Don Chaffey they agreed to not let the general public know about it. To this day 'One Million Years B.C.' is Raquel's biggest film hit for obvious reasons. She really is that woman that she portrays in the movie. During this time she married pro-wrestler Hubert Horatio Humphrey 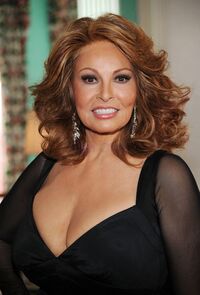 Meanwhile Alice Cooper and Raquel lost track of eachother, due to the drinking years of the Coop. Both then got invited by Kermit to star on The Muppet Show. It was Gonzo the Great who then introduced the Coop (when he was sober again) to Raquel again. Raquel then started to chase Alice and really fancied him at the time. Alice didn't gave into her advances at first but who can resist it after a while? Secretly Raquel gave birth to a daughter named Rose Cooper. To this day she's still a secret to the public.

After Raquel promised not to let any reporters know about this fact she forced Shep and Alice into making a singer of her as well as the actress she already was. Alice then with Dick Wagner wrote the song R&B song 'Someone Just Like You', which also is sung by Raquel in re-shoot of the Muppet Show episode with her. The theatrics in this number always involved a human spider. Nobody knows what his name was but we do know that the human spider took a sexually interest in Raquel. Raquel also conceived a child of him, later on this child would be known as 'Spiderman'.

Nowadays Raquel still stars in a number of tv series and movies but she never got lost of the spider image anymore. She refused to star in the movies of Spiderman and was furious to get several invitations of film director Sam Riami. Raquel was so mad that she sent of a big spider that has poisoned fluid in her to Sam. Sam then got killed by the spider who attacked him on set while filming the movie 'We Were Soldiers'.