“The raccilla kind of reminds me of me, in my younger years.”

“Absurd! One can not stand against Raccilla without knowing the male G-spot.” 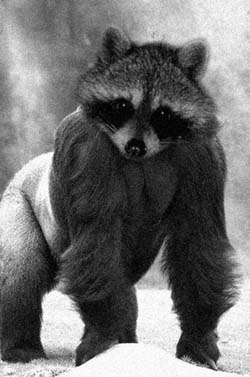 The raccilla (Procyon Gorillus), is a mammalian creature, which many experts have claimed to be extinct. Some have claimed to have sighted the raccilla, mostly in the East-Central Iowa area. The raccilla's diet is believed to consist of Cheetos (and the bag), small children and puppies, but will consume nearly anything. It is believed that the raccilla originated from southern Gondwanaland and during the continental drift, migrated toward what is now Midwestern United States. This migration has been dubbed by experts as "The Raccillian Migration". Ancestral remnants of the raccilla were unearthed during the excavation of the Antarctic Subterranean Coal Mines. These findings add to the migration theory. More recent remains were also discovered near the site of the Greek temple of Apollo. This also adds to the theory of raccillian migration.

The raccilla is an extremely adaptable creature. Raccillas are able to survive in about any type of habitat. They have been known to build their own nests or dens, but usually what they will do is take over another creature’s dwelling. The raccilla can consume an entire garbage bin (including the actual bin itself) in 23.5 minutes. According to bone density tests, the raccilla can survive for forty days and forty nights without food or water. The raccilla is a insomniacal creature, which means it never sleeps, ever. Studies of the raccilla's skeletal structure revealed that an increase of the chemical Radium in the cerebral cortex allowed for its sleeplessness. It is believed that the raccilla hibernates one day out of the year. Recent evidence has been recovered that has lead Racillaollogists to believe that this day of "hibernation" is nothing more than the Raccilla watching all 492 episodes of VH1's I Love the 80s. This would also explain the Raccilla's incredibly low IQ and complete inability to perceive left from right, north from south, black from white, and funny from really-fucking-annoying.

The raccilla, based on the statements of witnesses and the study of fossilized evidence, is a large quadruped mammal. It has many similarities to those of the common raccoon and the gorilla. The face of the raccilla is usually broad and short with a band of dark fur across the eyes. The torso and appendages are large and more adapted for terrestrial dwelling. However the raccilla is still capable for arboreal life as well. It has large, long arms best used for climbing and breaking things. The hind legs are shorter and used for walking and digging. The overall weight of a raccilla can vary depending on the environment, but averages out to about 778.525 pounds. However, the average Raccilla female will claim that 180 of those pounds are from her penis.

When it comes to mating, the male raccilla will go to great lengths to find a mate. The females will also increase the range of their territory, but not nearly as much as the males. Mating season is the only time when male raccillas will be around the females. The raccilla will produce about four offspring a year. In order, the scientific names of these offspring are, Dexter, Noodles, Greg and Atom. When the offspring are about a year old, they will reach maturity. The average raccilla has a life span of about thirty to forty years.

Both male and female Raccilla will menstruate literally on demand, or at the sound of Dr. Phil's voice. Although rare, some of these occasions have been caught on film: Blood Simple, Jaws, CH’I’Ps, Jar Jar's Magical Christmas, etc. From these documentaries most scientists have come to support the view that Raccilla must be studied with funding to keep the funding coming. For example, phase one of the Texas A&M study on Raccillain menstruation rituals determined that Blood Makes a Raccillian Good (this was later trademarked). Phase three, of course, was profit.