For those without comedic tastes, the "questionable parody" of this website called Wikipedia have an article very remotely related to Python.

This article is about pythons and python accessories. For the article about Trouser Snakes or Tard Farts, please disassemble your weapon, and continue.

“Oh my stars! That there's a nasty python”

~ Oscar Wilde on a horse

~ Dan Aykroyd on having intercourse with a serpent

Pythons were invented to be the spokes-animal (mascot) for that ballin' junk we call a "pie-eating contest." This "pie-eating contest" was then dubbed, "PIE-A-THON" by Lord Lemmy Kilmister. The first "PIE-A-THON" began in 1947 and was an outside affair, with balloons and Pepsis and Co-Coler and fruit salad and coconut dranks... and this guy. Anyway, like there were like only 2 entries for this like contest. The 2 who entered, Helena Bonham-Carter and Nancy Reagan, ate each others pie... then tasted each others baked goods. Nahmee? Yeah, ya do. So anyhow, they both loved eating out... side in a snake pit, so they finally got their shit together and decided that a Python™ would be a great mascot for pies and the like because the name of the contest was "PIE-A-THON."

They started making a python out of the flesh of smaller snakes, fat people, grandma jaw powder, and 30 lbs. of diapers. So they duct-taped that shit together, and voila! ...they were instantly eaten. 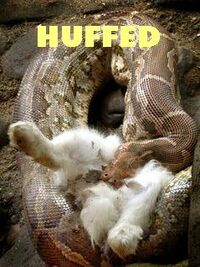 Señor Yum-Yums gets his huff on.

Also the people aforementioned were cats. Or maybe rabbits... or maybe a combination... or neither...

No one has been able to live with pythons. They smell bad, they don't clean, they're late on rent, and worst of all, I'm pretty sure they stole money from me swearing jar. But I guess it's my fault. I don't pay enough attention to pythons.

Pythons are extremly dangerous, and they live under your bed and in your closet.