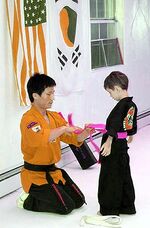 A paedophile and his student

Pae Do (Korean: 유애패도) also known as Cum Fu is an ancient martial art that has almost been forgotten. It is practiced by a few devoted followers around the world mainly Michael Jackson. One who practices the ancient martial art of Pae Do is called a paedophile, sometimes known as a Kiddie Fiddler. Because the disciplines of Pae Do are very demanding, most followers tend to be School Teachers, American politicians, Police Officers, Military personnel, Catholic Priests, and or registered sex offenders. The followers of Pae Do are very secretive and are a closed group to outsiders. This group is called a ring. Only a select few are granted permission to enter a paedophile ring, as the rings can be extremely tight. 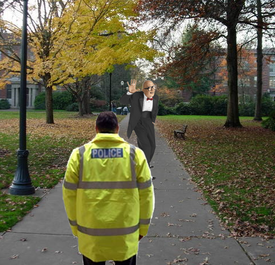 A paedophile as he attempts to sexually assault a police officer, to endlessly hilarious results.

Kata (形:かた) means "form" or "shape," and sometimes refers to the size of a child's package. More commonly, it is the pattern of movements and techniques that demonstrate physical contact with a child's genitalia. Kata may be thought of as a sequence of specific groping Pae Do movements that address various places under a child's clothes. It is important to remember that they were developed before police and underage sex laws were commonplace in Okinawa or China, so subtlety was not particularly important to their routines. Due to this, as well as general stupidity, almost every practicing paedophile has been caught attempting to seduce a young police officer, and immediately arrested and given a "stern talking to". This has, however, changed over the years as more people began to prosecute the paedophiles.

Kata by the same name are often performed with variations between styles, within schools, or even under the same pair of pants over time. None of these variations are more "correct" than the other, although some versions are widely regarded as more arousing than others. The movements also vary greatly in complexity, some being so complex that by the time the ritualistic and vaguely hypnotic movements have been completed, the child has escaped, and stolen the cell phone, wallet, porno magazines, underwear, and toupee of their would-be predator. A counter-variation of Pae Do addresses these movements, is known as Ju-Del Fu, it's practitioners largely known as "Juvenile Delinquents." 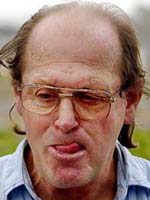 A highly respected Sensei of Pae Do. His black belt, in addition to being black, also has several polka dots on it, making him one of the highest ranks available in Pae Do. His experience is unparalleled.

Despite the seeming simplicity of a paedophile ring, there is actually a large and complex system that trains young paedophiles and allows them to rise through the numerous ranks.

Before even signing up to join a paedophile ring, one must first contact the paedophiles, a challenging endeavor to say the least. Most rings then have the new recruit go through an intense training process, similar to if someone was trying out for a varsity hockey team. Obviously, the challenges are quite different. Whereas one trying out for a hockey team might have to do 100 wind sprints, followed by 100 push-ups, someone attempting to enter a Pae Do ring might have to punch holes in 100 steal I-beams, and then throw 100 children over their own house. This gives the rich, with their elaborate houses, a distinct disadvantage, as they would have to throw these children over a much larger house. This is believed to be intentional, as the early paedophiles of China, with its strict class system, most likely hated the rich upper-class, and used Pae Do as an effective way to get revenge on them through their children.

As with Karate, Tae Kwon Do, Kung Fu, and most frat houses, one rises up through the ranks of Pae Do by showing merit and passing a series of tests. Of course, the only important belt is the "black belt," because if a paedophile told you to back off, because he was a green belt with 2 yellow stripes, 11 polka dots, 6 hearts, and a grass stain shaped like the country of Laos, you'd almost certainly say something along the lines of "what the fuck?" This is a completely natural reaction for someone who has been molested, and is one of the phases everyone in your situation goes through. It might be anger, or maybe denial, or intense orgasmic pleasure, I personally don't care which. Who am I, your friggin' psychiatrist?

Pae Do has a dojo kun, which is basically a set of guidelines for paedophiles to follow both in their cars(where fresh children are recruited) and in their houses(where Pae Do gets more advanced, challenging, hardcore, and deep).

There are many ways to say this, depending on the organization teaching Pae Do. According to the S.P.Y.(P.A.N.T.S.) or Shotokan Pae-do Youth (Peeking And Not Touching is Stupid), it says: