“No!! this is NOT compensation” 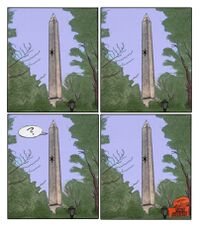 The History of the Obelisk[edit]

Obelisks have long been known to hang out in places where the human inhabitants have small penises, and since the beginning of time no one culture has used the obelisk more than Egypt. The story of the obelisk dates back to ancient egyptian times when the men of egypt, despite their proximity to the BigusDickusAfricanus people, were experiencing an extreme lack of sexual potency. thus one fine morning after yet another sexless night the pharoh decided it was time TO COMPENSATE and thus began the Obelisk. After the construction of the Obelisk egyptian men had no trouble getting hard all they had to do was look at the big rock obelisk, as opposed to their partners, and the had no problem BONEING all noght

(Whoever wrote this is a weirdo)

An obelisk is a huge phallic symbol used through out the ages to represent man's desire to have a larger penis. It can be made of any materials except bubbles, because obelisks need to have a pointy end and bubbles can't do that.