~ Magic 8-Ball on is OMG Ball really any good? 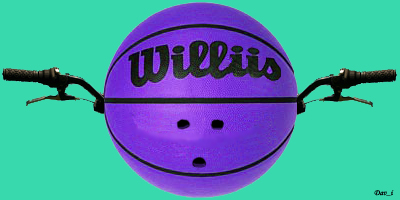 The OMG Ball, made by Williis, a well renowned maker of the OMG Ball

OMG Ball is a sport that emerged in the mid 80s and has been gaining popularity ever since. It looks set to become a new sport at the Extreme Olympics before long. It has been described by many as 'The Ultimate Sport', although the majority disagree.

The basic premise of OMG Ball is simple; two teams (formally 'Troupes') of 18 compete against each other attempting to score the most circlets. How to score a circlet is explained later.

Each troupe is made up of the following: 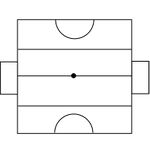 A Representation of the OMG Ball court

The Pitch should be a square of 60m x 60m, with lines drawn at the mid-line (and a circle of radius 1m at the mid-mid-line) 15m lines, and to indicate the C Zones, which are a semi-circle of Radius 10m from the centre of the end-line. At the midpoint of each end-line there is a large elasticised net with a bell placed on a stand 2m behind the net. Also at either end of the mid-line is a Goal of width 15m.

One of the most unusual features of an OMG Ball court is that it is sloped. From the mid-line, the court slopes upwards at a 20 degree angle towards the end-line in both directions. This means that it is harder for the Forwards to score and easier for the Rearers to defend.

The Ball itself is a hybrid of balls from other sports. For the most part it is similar to a basketball, but marginally larger, and purple rather than orange. It also has 3 holes in the top of it arranged in a triangle, as in a bowling ball. Finally, it has two bicycle handles on either side.

The winner of the game is the team who scores the most circlets. A circlet is scored by making the bell behind the net ring, and this is done by throwing the OMG Ball at the net hard enough so that it goes far enough to hit the bell. There are, however, limitations on how this can be done. The ball can only be thrown at the net when the player is within the C Zone, and the ball can only be thrown at the net by using the holes in the ball. The Possessor uses an oversized crosse (from the sport Lacrosse) to attempt to catch the OMG Ball and prevent it from reaching the net. Failing that, the Retainer can stop the ball from hitting the bell by pulling the net in the opposite direction so that its elasticity is used up and the ball will never reach the bell. Both the Possessor and the Retainer must ensure that they are never hit by the OMG Ball because if they are, then the other team may attempt a Spare Jack (explained later).

Important rules that must be followed:

If either the Possessor or the Retainer ever touches the OMG Ball then the opposing team plays a Spare Jack. The three forwards must attempt to score a circlet. The players can have as many attempts as they like but have a time limit of one minute, and must remain outside the C Zone at all times. If the number of the attempt when (and if) the circlet is scored is a prime number, then the team must attempt a Wookiee Fluke.

A Wookiee Fluke is used to determine which of the two teams will start with the ball. The Mid-Rearer stands in the goal of his choice and throws/rolls the ball to try and get it into the other goal. The handles on the ball mean it is more likely to stop in its tracks, but the slope of the court means it is more likely to keep going and make it.